Picture Pong is a recent community event in the OSR MINDSCAPE, in the chain-letter format of "see thing, do what thing say". People write a blogpost based on an image, and then add a different image to their post, someone else makes a post based on that image, repeat forever.

The most recent one at this point (I think), was by Archons March On, sharing the following image: 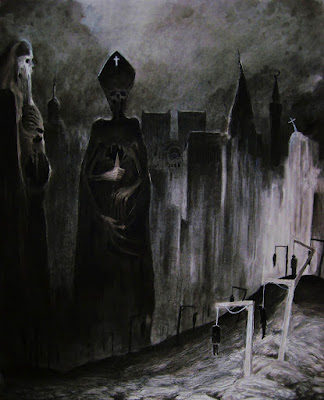 The grand city of Hyperborea stood for tens of thousands of years. Its mile-high towers rose imperious above the frozen plains.

And then they didn't.

Hyperborea was put to the torch by the armies of Man, drawn to the frozen tundra by promises of unnatural science and grand magics. The giants were killed, their towers were burned, and a new city of humanity rose from its ashes.

But the giants survived, in a way. They rose up from the dead, with their memories of Hyperborea intact. They saw this blackened, soot-covered city, and their blood boiled. This could not go unpunished.

These liches toppled the city of Man, and rose their towers anew. Now, the giants rule Hyperborea once more, holding humanity under their eternal tyranny.

Gift-Thieves: No one is born with magic in Hyperborea. The only path to it is theft - use of Hyperborean genetic editors, ancient blessings, or consuming the flesh of a lich-giant. The Gift-Thieves attempt to unite these daring few, offering clandestine (and highly illegal) magical services to the populace.

The Final Legion: Everyone remembers the armies of humanity who tore Hyperborea from the grip of the giants. Some of them survive, although they are far too old to return to the battlefield. Instead, they build their new Final Legion, preparing to break the giants once more.

Birdwatchers: The Birdwatchers are a secret society, hidden from the view of the giants. They focus on stealth, assassination, and manipulation of the strange vermin of Hyperborea. They have no interest in resisting the giants - they plan to build a shadow government woven into Hyperborea, directing it from within.

The Next Move
Here's my image for Picture Pong. Take it, let it into your MINDSCAPE, turn it into words, put the words on the internet.