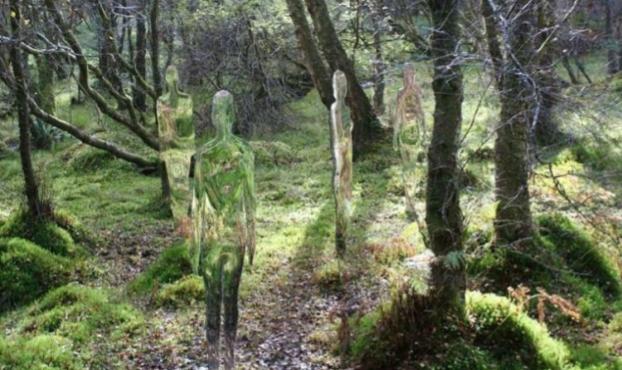 The Iyr
The Iyr appear through gates torn through the fabric of the dimensions, clawing for territory in the Prime Material Plane (or equivalent). Their invasions are led by a Priemarchos, based on limited translation of their language, but nothing is known of their leadership above that level: the gates last for too short a time for exploration at this time.
Iyr Prielia
Iyr Prielia are the frontline fighters of the Iyr invasions, bound in translucent, whitish crystal armor, and armed with Sunslivers or Psychespears. They fight by taking advantage of their mobility, and avoid use of static defenses.

The Orincepsis are gifted with nightmarish psionic powers, running through the conductive crystal of their disproportional heads. Instead of purely destructive abilities, their mental abilities manifest through manipulation, confusion, and control. They are sent out as infiltrators, in the first wave of an invasion. However, because of the short time they can disguise themselves, they are often reclusive, and act strangely.

Weapons
Sunsliver
The Sunslivers are glass, tube-shaped shortswords built by the Iyr. When activated, the tube fills with a bar of solidified sunlight.


Damage: 1d6 Burning
Weight: 2 lb.
Properties: Finesse, Light
Burning Light: Once a day, the Sunsliver's light can burst out from its casing in a hellishly bright flash, dealing 1d6 Radiant damage in a 15 foot cone.

Psychespear
Psychespears are short glass spears tipped with a hole in space. While it isn't large enough to cause physical harm, the mind recoils from its touch, and it bends attempts at scrying.

Damage: 1d6 Psychic
Weight: 2 lb.
Properties: Thrown (20/60)
Scrybending: Attempting to scry someone holding a Psychespear, there is a 25% chance of failure.

Shinegun
Shineguns work off the same process as Sunslivers, binding sunlight into glass. When triggered, the weapon releases the light in a burning beam. They also have a secondary mode, which erases every charge, dumping all of them into a single, apocalyptic blast.