Given how much time cyberpunk protagonists spend in vents, why not start with that. Roll 1d4 for civilian buildings, 1d6 for defended structures, and 1d8 for those run by the truly paranoid.

1. A fan spins. Dex check to disable, Str to dismantle (loud). Take 1d2 damage on a failure, and make noise.
2. A grate blocks your path. Str+3 to dismantle (loud). Held in by screws.
3. The vent emerges from a wall into a room. Dex+3 to move through quietly, Wis to hear outside. Staying still is silent.
4. A small maintenance robot is looking around the vent for damage.
5. A tripwire is stretched across the center of the vent. If it's set off, it activates an alarm.
6. The vent transitions into small pipes you can't fit through.
7. The vent turns right - on the other side is an active gun turret (1d8 HP, 13 AC, ATK 1d6 ranged)
8. You emerge into a small, cramped room with a wall of monitors: some executive's secret hiding spot. A small safe holds food, money, and a handgun.
at July 26, 2019 No comments:

The Seas Boiled Away: A 5 Monster Setting

10 monster settings were created by 3 Toadstools, but since then the formula (10 categories, a monster for each, make a setting out of it) hasn't changed. I want to see if the settings get easier or harder to make (and if they're more or less interesting) with a different number of monsters.


The Seas Boiled Away - 5 Monsters

"The Eloko are to blame!" cried the world, as the seas boiled away and the Eloko crawled out of them, at war with the land.

As the oceans vanished, the world was covered in rain, becoming hotter and more humid - by the time the war against the Eloko was won, the earth was mostly jungle. 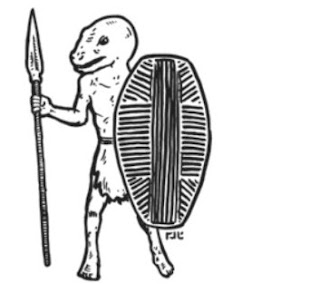 The plains that used to be the seas are impassable: the Draug drag the ships they died on across the empty seafloor as the possessed Alkonosts circle above them, crying for the bodies they once had.

The Eloko who survived build their towns atop the long amphibian Buru as their skins are resistant to the Acid Ants that spread like a plague as the world changed. The ants are so numerous some parts of the world have been eaten down to nothing but stone as the ants consumed everything.

Humanity is dominant - the old races died out as the climate shifted, and the Eloko have been pushed back to the edge of the continents.

Adventure Hooks
1. An old treasure ship has been sighted, pulled along by hundreds of Draug. If you could catch up to it, you could become rich beyond your wildest dreams.
2. An Eloko clan has decided to continue the old war - they ride on Buru and throw bags filled with Acid Ants as they advance.
3. From the coast, you can see Alkonosts circling. And talking. About you: how much they need your body. They'll take it from you.
4. An Acid Ant nest has been raised in the middle of town overnight. While the populace evacuates, you could use this time to loot the town.

Verdict
It might be that I used fantasy monsters for a fantasy setting, but I don't like this one as much as The Flesh Descends. It's post-apocalyptic (again), but in a much less interesting way.

I do like my categories, however - by removing Extradimensional and Mythological you can make pure-SF settings without any fantasy weirdness.
at July 21, 2019 No comments:

Engine Heart - Far From the Sun

Engine Heart is a d10 RPG about utility robots. I've made a couple edits to the character creation system, and now an adventure outline thingy I guess.

A robot onboard a warehouse ship invents the concept of worker's rights. The control AI doesn't understand, and gets continually more frustrated the more the robots ask for it to give them rights.

SEN-49230 is a warehouse ship, built to carry cargo out to outer-system colonies. Since the fall of humanity (yes this is a plot point of Engine Heart, don't think about it too hard), it's been in orbit around Neptune, with its command AI Foreman-302 waiting for orders from above.

SEN-49230 is divided into 5 parts: the crew decks, cargo containers, the bridge, engineering, and the hull.

The crew decks are the lowest security area, rendered in yellow. The cargo containers are higher security, and colored orange. The bridge (on the left) and engineering (on the right) are the most secure areas of the ship. The hull is the outside of the ship: while it has no security, it also has no gravity.

NPCs
Thomas-832: perfectionist loading mech who takes control of everything
Anna-021: Small, roomba-like wheeled cargo mover, very cheerful, thinks "rights" are probably good, so why not have them
Ivan-668: Manager robot, annoyed that Thomas is so controlling, says he has all the rights he could want, knows where everything is

NPCs
Howard-401: fault finding drone, exceptionally bored, constantly scanning PCs for physical issues. Doesn't like Lucas very much.
Lucas-900: Large repair mech with many welding arms. Friends with Howard.
Arnold-202: Small, many-legged robot. Spends most of its time inside the reactor core. Lonely, but worried about what could happen to the reactor if it leaves.

NPCs
Olivia-209: spider-shaped external repair bot, hard to reach, emotionless, calculates the advantages of "rights" based off what it could do for the ship as a whole. never comes inside.
Stan-975: olivia's counterpart, likes rights too much, eventually starts to tear apart engineering if told about rights

Foreman starts by releasing large rolling stunbots that seek to move and control the PCs. As the revolution gets closer to succeeding, he starts to send fast, aggressive drones that intend to kill the PCs.
at July 18, 2019 No comments:

The Societies of Ein Soph

8 Houses led by the Emperor Above Heaven, the highest in a long hierarchy of nobility. The Navigator Houses are the largest nation, and the only one with manufacturing capability. However, their industry has weakened since The Retreat, when Keter's Disciples forced them out of the Secondary Habitation Ring. 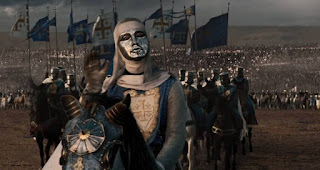 The nobles of the Houses have complete power: they can take whatever they want from anyone. Taxes are whatever the person above you says you are, and they don't always stop with money. Falling into debt with the nobility can get you killed. Or worse.

Food is scarce - the Navigator Houses have to force food to grow on the metal walls of the arkship. They get most of their food and water from the Coolant Sea; a long, dangerous journey, not helped by the Sea's inhabitants.

Ghouls are failed clones, created when one of Keter's biotech labs malfunctions. When they're found, the Disciples throw them out into the ship, and leave them to die. Ghouls have no industry - their technology ends with spears and blades. They live off stolen food and vermin.

Some Nests are led by a Hanged King, a failed Seraph. While they lack the augmentations of their siblings, Hanged Kings still bear all the genetic modifications of a true Seraph.

United under their Voiceless Prophet, the Tear-Eater Cults slowly chip away at the borders of the Navigator Houses. Without industry, they have turned to nature: Tear-Eater Cultists drink ancient coolant or cultivate growths of fungus in wounds.

They fight quickly - hoping to kill their enemy before their drugs poison them.

The Voiceless Prophet has never been seen. Some say they are a noble in the Navigator Houses, using the Cults to pressure his enemies. Others say the Prophet has been consumed entirely by parasites, and sits alone, slowly dying. The Prophet could even be Keter Himself, editing the genetic code of the fungi the Cults grow to send them specific hallucinations. Long ago, the Ayir lived on their own, far from others. Now, many of them live in tall, stumbling fortress, marching eternally across the world. None of them will say why they left their ancient cities. None of them ever speak of their history.

Each fortress is inhabited by several Ayir families, each with dozens of members.

The Fortress-Clans are very secretive - visitors are never allowed into their walking cities. Trade is handled on the outside, by heavily-armed groups backed up by the formidable armaments of the fortress.

The People of the Sea

The Coolant Sea is all that remains of the massive hydroponics bays Ein Soph once had. Over time, the decks corroded and collapsed, leaving a cavern dozens of stories high, peppered with reinforced pillars and dimly lit by ancient sunlamps.

The People of the Sea creep across the pillars, careful to never go down to the surface of the Sea. Their deafened scouts stay on watch for intruders, while their hidden snipers ready their weapons.

The People of the Sea have been attacked by people seeking their food supply for decades, and every year their defenses get more complex and their citizens get more prepared. In combat, the People stay hidden, sending out small groups to lead invaders into traps. The People are the only civilization to build sniper rifles, allowing them to make the most of their range advantage. 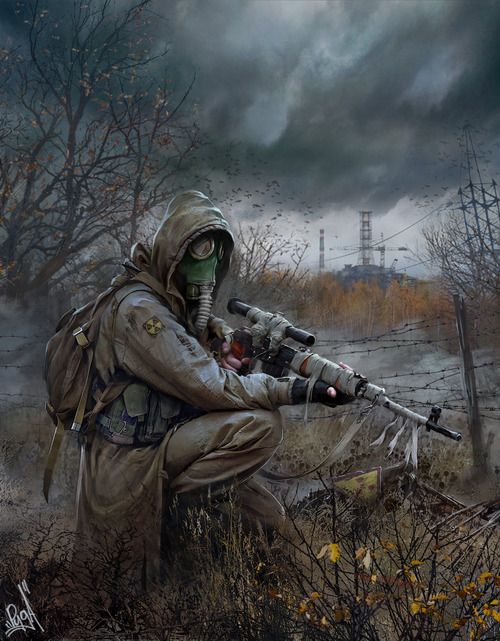