I've been posting about Sunless Horizon for about a year, and after finally getting it playtested, have it ready for a wider release. Since this'll be the landing point for new people to the game, I've also put together a setting recap.

Despite all the stuff I've said about Sunless Horizon, I've never talked about the system.
Sunless Horizon is classless and levelless, with character progression entirely through equipment. Its core is a die step system, where your stats determine Check Dice that rolled against static target numbers.
Combat is working off a simultaneous resolution system, and instead of HP or an abstract wound system, damage for the PCs goes directly to a large Wound Table, similar to the GLOG's Death & Dismemberment.
Most of the rules are exploration-focused; a pointcrawl base expanded with rest actions, pathfinding, and a Difficult Terrain system for adding more gameplay to climbs and crawls.
The game is currently mechanically complete (hopefully), but is missing content such as generators. Currently, there is a 4-entry bestiary and 2 d6 Obstacle tables, mostly for use as examples. Later releases will be focused on patching holes and developing these tools.
Click on the cover to take a look, and feel free to tell me what you think in the comments. 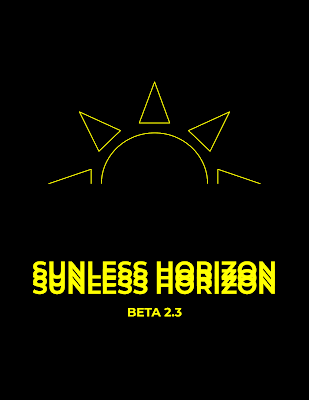 Sunless Horizon is a SF-horror RPG set on the worldship Ein Sof; the last sanctuary of humanity at the end of time.
The worldship's AI, Keter, has created new creatures to serve it, working deep in the most inhospitable corners of Ein Sof to slow the machine's decay. Some of them have escaped, creating new societies far from Keter's eyes.
The players are members of these societies, sent out into Ein Sof's halls to hunt for needed resources.

Peoples of the World

The people of Ein Sof come in many forms.

Kaiva are tall and thin, with large faces and knotted, bulging veins. Their skin is translucent - under it is a shimmering silver second skin, which absorbs radiation to balance out their tremendous food requirement. In times of stress their veins pulse, and they discard tremendous amounts of energy in a single fast movement, damaging themselves in the process. However, the energy stored for these actions leaves little for the body to use to repair itself.

Seeleh are heavy and strong, with their bodies arranged radially - 3 faces, 6 legs, and 6 arms, all emerging from a reinforced central spine. They can carry more than other phenotypes, and their multiple lungs let them last longer without air. However, they are more susceptible to Keter's words than the other phenotypes.

Iklen are strange and graceful. Their ridged skin changes color constantly - some of these patterns force eyes to slide off them, as if they didn't exist. Those ridges are covered in small scales, that shed from the Iklen and drift through the air. If inhaled, they change the emotions of the sufferer. Iklen move slowly and inefficiently, as if dancing. When surprised, this dance ends, and they must consider their next moves.
Ayir are small and fragile, with gargantuan eyes. Their light weight and small size helps them navigate difficult terrain, but make them more easily injured. Even when they sleep, some of their brain stays active, letting them move and act.

Keter's only goal is to keep humanity alive and safe in their Empyreans while He works towards the completion of the Ishtar Program - opening a gate to a stable new universe, where humanity will rise once more.
However, the Program may take tens of thousands of years of technological advancement and failed attempts, and Keter's machines would fail someday. But, while He can run out of metal, living servants could sustain themselves indefinitely.
But despite Keter's best efforts, Ein Sof is still collapsing. Many of the biotech bays used to create these new servants now lie abandoned and unreachable, following their old orders. These lost thousands formed their own societies, and now live in the ship like parasites.
Those were not His only followers, however. The machine Disciples of this silicon god still stalk through the halls, staving off the ship's failure and hunting those who have escaped His grasp.

The Houses are an industrial state, led by hereditary nobility. They have only just arrived to this part of the worldship, after being driven from their homes by the Disciples.
In their territory, peace is kept through force. Holes are burned through walls, lights are strung up across new roads, and dissenters are strung up with them.
They trade with the Oasis Kingdoms, but plan to soon solidify their influence. If things go their way, tanks will roll through the Kingdoms' streets within months.
Of course, there's no guarantee things will go the Houses' way. The Lord Navigators, each head of a House, are only held apart by a Regent. Border skirmishes are becoming more common.
The Houses will go to war. The only question is who it will be with.

The Kingdoms were here first. They have control of most of this region, with each kingdom built on top of an important resource, whether that's power, water, farmland, or rare resources. Their authority was unquestioned - there has not been war for generations.
But now the Houses are on their doorstep, and the Kingdoms are forced to trade food and art for guns and time.

Ghouls are born from human stock, meant for the Empyreans. Some stage of the cloning process was, when viewed through Keter's unknowable perceptions, deemed a failure, and they were released into Ein Sof to survive on their own.
Some nests turned to raiding towns and attacking traders. Now, both the Houses and the Kingdoms see them as a threat; that they are to be shot, and their nests are to be burned.

People of the Sea

Sea People shelter in the remaining towers of the Coolant Seas, farming the meager food that can be grown in its blighted water. This resource leaves them targeted by other groups, including the Navigator Houses.
To protect themselves, the People of the Sea have turned their home chambers into trap-webbed nightmares. Despite this, outsiders are still more than happy to throw themselves into the grinder in the hopes of finding food.

Skinborne groups avoid Ein Sof's internals for its cold, sterile skin. They travel nomadically, floating through space in improvised voidcraft. The rare times they enter the ship are for violent raids, gathering food and components before fleeing.
All these resources are being gathered for one purpose - completing the Ark, an escape ship made from a single engine of Ein Sof. They say the Garden World is passing by soon, and the Ark can bring them there.

To the Sustainer Cells, everything is temporary. They say that someday, no matter how far in the future that is, the world will be safe. To keep themselves alive over this vast gulf of time, they commandeered many of Ein Sof's cryobays.
Now, most of their population rests, while those still awake struggle to keep them alive. This lack of manpower has forced them to focus their society on efficiency, creating a 4-caste system. Personality has been eroded, with Sustainer society expecting newly-awoken members of these castes to act identically to those they've replaced.

To keep themselves safe, the Tribes stay on the move. Their cities were uprooted and retrofitted into sealed walkers, each one hiding a secret - a functioning seed AI the Tribes hope to grow into a weapon to topple Keter from His throne.
However, the seed must be kept safe. Infohazards and hacking attempts can (and have) possessed them, and sent cities marching off cliffs.

Many tiny groups, unassociated with any faction, hide within Ein Sof. Runaway nobles from unknown nations, dragging their servants on a doomed quest for independence, strange cults following dream-quests from decoded transmissions, quiet villages, and a thousand thousand other mysteries, all (eventually) randomly generated.
at November 15, 2020