It's been more than a year since I last reviewed some GLOG hacks, and since then there have been many, many more. So, after a bit of a shove from Oblidisideryptch, I decided I needed to get back to work and release some more reviews.

This is only the start - I've already found some more hacks that will be reviewed soon.

A note: I did not play any of these games, I only read them.

Minimal GLOG is an attempt to package an almost entirely orthodox (read: like Rat on a Stick) GLOG ruleset in the smallest possible space.
Minimal GLOG succeeds in its goal of being an incredibly concise version of the GLOG rules, but it fails to be complete and repeatedly references things it does not include - there are no listed professions or spells, for example.

But the question is - does a generic fantasy GLOG hack actually need any of these things? After all, the only thing that really matters to most readers is a good mechanic or two they can steal, and Minimal GLOG has that not just in its Papercasting and Consultation, but also in its simple HP and stat generation.

In contrast to Minimal GLOG, Jar of Dirt is a large, setting-focused GLOG hack built to provide a low-magic piratical game.
In terms of pirate GLOG rulesets, I prefer Jar of Dirt to Skerples' ruleset. While much of it is stolen from that hack, the core of the system is closer to what I tend to use. It's a very complete game, with plenty of subsystems (hirelings, ship rules) and resources (setting, tables) for the kind of campaign it's built for.
Nidus

Nidus is another short hack, meant to be a Call of Cthulhu-style supernatural horror game.
This hack raises an interesting question - what counts as a GLOG hack? Nidus is labeled as a GLOG hack, but it doesn't have the 2 most common features of the GLOG - the Templates system and the MD-based spellcasting.

Either way, it has a few things possibly worth taking for a more traditional hack - the Death and Dismemberment system is wonderfully simple, and Nidus's skill system is one of the best ways I've seen skills implemented in a roll-under system.
at May 20, 2020 No comments:

The Ghouls were never meant to exist. They are a byproduct of Keter's biolabs, misshapen mutants grown from human stock meant for the Empyreans (I should probably rewrite that article, but here's the simple changes - they are no longer a dystopia, there are a load of them spread through the ship, and it's built to be an area found very late in a campaign, that leads into finding out Keter's goals) or modified genes built for His Seraphim.

When they are found by the Disciples, they are removed, and left in Ein Soph to die.

Batches of Ghouls tend to stick together, forming small groups. Once they move to safety, they create encampments of tiny metal shacks and communal fires. Their technology is nearly nonexistent - they hammer together dull glass-tipped spears and small metal shields for hunting, set simple mechanical traps to defend their camps, and fill the halls of Ein Soph with firelight.

These tribes are very local, rarely ranging more than a mile from their camps. They are also very small, with about 50 people at the most.

Strangely, Disciples tend not to react to the presence of Ghouls, a fact they are happy to take advantage of. Many tribes keep a few Acolytes or other low-level Disciples tied down somewhere in their camps, to use as weapons and labor. According to the Navigator Houses, this means Ghouls are intrinsically evil - look at how these dark spirits follow them!

Alone in the Firelight

Ghoul nests are spread throughout the worldship - some were found by the Navigator Houses before the Retreat, where they were treated like pests. Jackals would be sent to kill them, wiping out entire nests in a day with incendiary weapons and mass gunfire.

The Houses feel no different after the Retreat, but they have had unexpected difficulty with these Ghouls.

Even before the Retreat, the Ghouls here were hunted by the many Oasis Kingdoms, and each survivor teaches new nests ways to protect themselves. Older nests are not the simple villages Jackals are used to - they are fortified complexes webbed with thin tunnels the unencumbered Ghouls slip through with ease as Jackals are trapped by the bulk of their equipment.

Some nests are even larger threats - so dangerous that they are either destroyed at all costs or carefully avoided. These nests are those gifted with a broken Seraph. Ghouls call these crawling, mewling creatures Hanged Kings, and idolize them as the last remnants of their pasts. They are only spoken of in the past tense - they are only fragments. They are already dead. 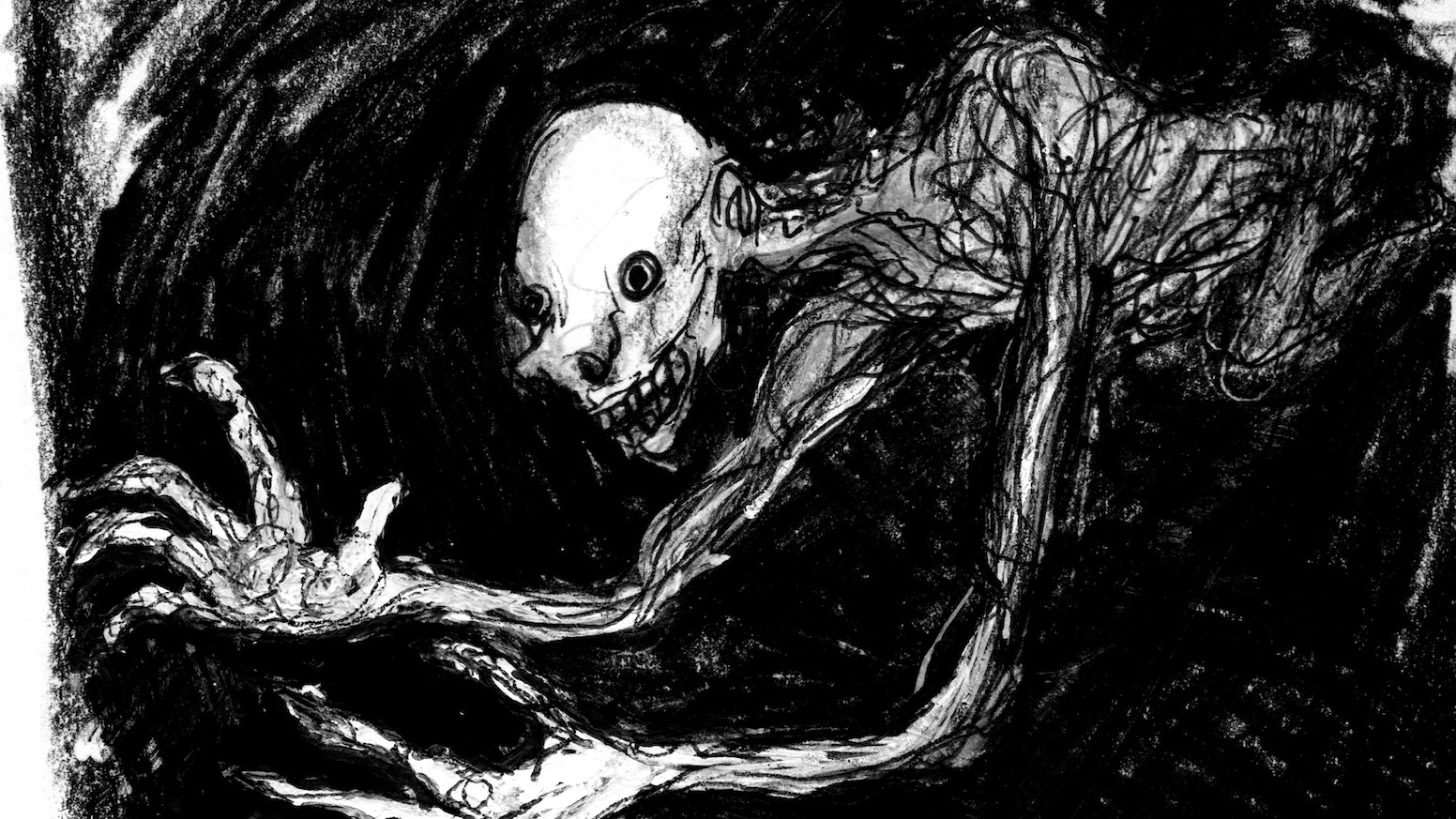 The Ghouls say that once, in the past, the world was beautiful. They were tall and strong; they built cities under a benevolent god, and ruled over all they surveyed.

But slowly, painfully, that god died. Its body calcified into a maze of impervious walls, all without the light it used to radiate. Its spasms threw the world into disarray, shattering the utopia the Ghouls once had.

Some pieces of it still survive. Fragments, hidden in metal shells. These are servant-angels, left by their god to help them. Its heart still beats, and with every pulse more Ghouls rise from its blood. This heart is suffering, forever. It must be killed, so it can be at peace.

They say their god was not the only one who died. All the strange peoples of the worldship come from their own gods, entangled with this one. If you could dig your way out into the void, you could float among an infinite plane of frozen corpses.
at May 10, 2020 5 comments:

Coming, as all other things do, from a strange discussion on the OSR discord. 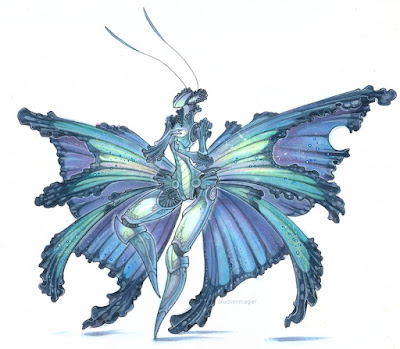 The Samurai Butterflies are strange, ethereal creatures heralding from the Shining Isle, a wandering island that drifts across the oceans. Rarely, they wander into human lands, where they will gladly work as mercenaries, soldiers, and other combative professions, stating it is necessary for their kind to survive.

Some of them seem to remember events from long ago, and even events they say they died during. Whenever one dies, they shatter into a swarm of tiny blue butterflies, which fly in the direction of the Shining Isle.