THE AMERICAN MILITARY IS CENTERED IN WASHINGTON, D.C AND FACILITY 1, BUT THEY ARE BEGINNING TO TEST CONTROLLED INFRALS IN VIETNAM AND BRAZIL.
THE ICRA IS GENERALLY REGARDED AS PART OF THE MILITARY, BUT IS GENERALLY USED IN DOMESTIC ACTIONS IN THE UNITED STATES AND BRAZIL. THE ICRA DOES NOT HAVE ACCESS TO MILITARY EQUIPMENT, BUT ARE USUALLY GRANTED INFRALS DURING OPERATIONS IN BRAZIL. THEY ENJOY AN UNUSUAL DEGREE OF FREEDOM: ICRA ASSET COLLECTION TEAMS TASKED WITH RECOVERING INFRALS ARE GIVEN ALMOST COMPLETE AUTONOMY AS LONG AS THEY FOLLOW THEIR MISSION'S OBJECTIVES AND MINIMIZE CASUALTIES.

LIFE IN THE US

THE UNITED STATES HAS BECOME MORE AND MORE DIVIDED SINCE THE TAKEOVER OF BRAZIL. CIVIL RIGHTS MOVEMENTS HAVE ABSORBED DISPLACED BRAZILIANS, INCLUDING MEMBERS OF THE MNB, OR MOVIMENTO NACIONALISTA BRASILEIRO: A VIOLENT BRAZILIAN NATIONALIST GROUP.
AS MNB MEMBERS PUSH CIVIL RIGHTS MOVEMENTS INTO EXTREMISM AND VIOLENCE, THE AMERICAN GOVERNMENT RESPONDS IN KIND WITH SWEEPING POLICE MILITARIZATION INITIATIVES.
OUTSIDE OF THE CIVIL RIGHTS MOVEMENT, LIFE CONTINUES AS NORMAL: THE ICRA HAS SUCCESSFULLY HIDDEN INFRALS FROM THE GENERAL POPULACE, FEARING THAT THE DISCOVERY OF ALIEN LIFE WOULD CATAPULT SOCIETY THE REST OF THE WAY INTO COMPLETE CHAOS.

1. PROJECT HIGHRISE HAS MADE IT'S FIRST BIG BREAKTHROUGH, HAVING DISCOVERED HOW TO CONTROL INFRALS: ELECTRIC SIGNALS DIRECTLY TO THE "BRAIN" USING METAL NEEDLES CONNECTED TO BATTERIES.

2. SOME MEMBERS OF THE GOVERNMENT THINK INFRALS MIGHT BE NEEDED TO QUELL RIOTS

3. MNB MEMBERS ARE PLANNING AN ATTACK ON A FACILITY IN THE AMERICAN SOUTHWEST

4. ICRA ASSET COLLECTION TEAMS SUSPECT A GROUP UNAFFILIATED WITH THE MNB TO BE HOLDING INFRALS IN A WAREHOUSE IN NEW YORK
at December 28, 2018 No comments:

A Positively Monstrous Way of Thinking

Back in 2010, noisms posted a piece on fighting large groups vs. single large enemies. In his experience, D&D is often paired with the first method, where encounters are against groups of monsters, with single foes only appearing as rare boss fights.

I'm more interested in the second approach, which he titles "Giant Slaying": rare encounters with large, threatening, and unique single enemies. In my opinion, this could be expanded even further into a monster of the week style game, where entire adventures are built around a single monster.

Each of these adventures are split into two portions: the chase and the kill. For some monsters, the chase is the hard part, while others are easy to find, but difficult to kill.

All of these are meant to be difficult fights for 1st or 2nd level parties, so stat accordingly.

Soul Halcyon
The Soul Halcyon is an infection as much as it is a monster. It spreads between people, connecting a hyper-empathic hivemind: the infected are so nice they'll point you towards the Soul Halcyon itself: the problem is catching up to it.

The Kill: The Soul Halcyon's speed continues to reward it in combat: it's twice as fast as a man, and can fly short distances. Along with melee attacks, its scream forces WIS saves to resist inclusion into the hivemind (treat as a Dominate Person spell). 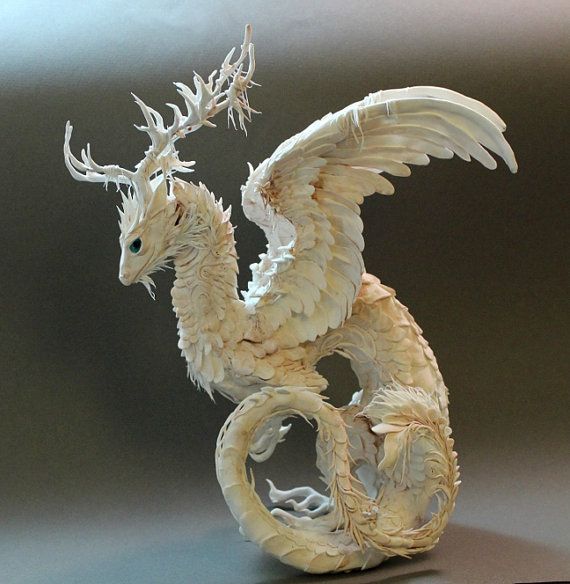 The Chase: The Pale Antler Dragon shifts through the densest parts of trees, constantly scraping as it moves. Its cowardly nature leads to its use of simple traps and diversions: creating decoys to lead the party under a falling log, for instance.

The Chase: Navigating the maze-like passages around the Heart takes time as they shift around you: every round there's a 1-in-6 chance they flail wildly, requiring DEX checks to avoid the waving spikes.

The Kill: The Needler Heart is immobile but surrounded by writhing spikes: cutting them off is easy, but they attack you freely as long as you're in range. The Heart can grow spikes from the floor to effectively remove parts of the terrain, or attack directly by extending a massive needle.


Lotus Beak Wyrm
The Lotus Beak Wyrm's scales flake off constantly, creating a hallucinogenic haze around it, that remains as it moves through the mountains its made home.

The Chase: Following the Lotus Beak Wyrm directly only gets the PCs more lost as the hallucinogens set in.

The Kill: The Wyrm is very lightly armored, but the combination of the waving fronds on its body and the hallucinations create a very unpleasant environment to fight. The hallucinogens are deactivated by water: shoving the Wyrm into a lake or stream will make it far easier to kill or capture.
at December 13, 2018 4 comments: