This is a pretty short post, mostly to try out a more vague style. Tell me what you think in the comments!

Keter is, to a point, under siege - the Navigator Houses spread through His halls, pulling apart the decks, opening doors, and tearing out components all across Ein Soph. It's not a problem yet, but Keter knows, some day thousands of years from now, His resources will be expended. There's only so much metal.

But there is endless flesh.

Seraphs are built from human DNA, saved in the Ein Soph's databanks. They are stretched, modified, augmented. They become awful, crawling things - if this stage fails, they are released, where they become a Hanged King of the Ghouls.

From here, they are enhanced - permanently affixed to titanic exoskeletons, welded to horrific weapons, and anointed by Infopriests. 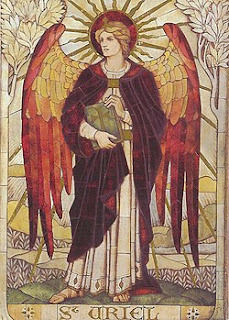 Uriel bows under the weight of its weapon - a titanic plasma emitter, releasing tides of burning light. As the emitter fires, Uriel burns, screaming as its flesh melts against its armor.

Its light is unstoppable, slipping through the smallest hole in its blind quest to burn away heresy. 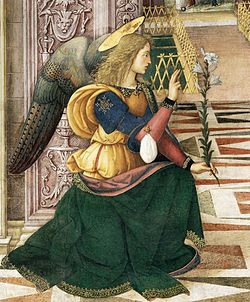 Gabriel reaches out with its dozen tongues, hunting for those who would escape Keter's wrath. Its voice is a honeyed lie, twisting itself to draw in its prey. It has hunted through the halls forever, tuning its mimicry over countless repetitions. 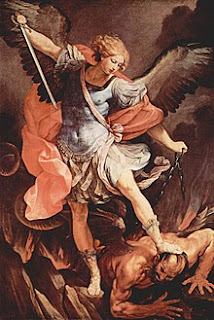 Michael is Keter's sword and hand, descending from heaven to scatter His foes. Its bent, twisted hands grasp a long, time-dulled blade it brings to bear to crush all who would stand against it. 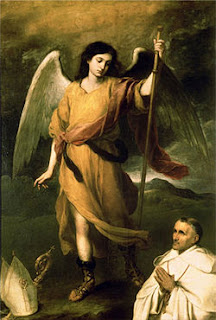 Raphael brings mercy and darkness to the legions raised against Keter. High towers stand upon its back, pouring out nanobot suspension fluid - an oily black liquid that twitches and slithers as if alive, and grows featureless arms to grasp and infect. 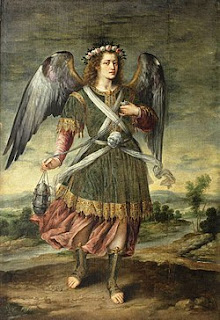 Selaphiel shows the truth to heretics - its wide eyes display His words, and those that see them suffer. All of His infohazards are arranged in front of it, chosen as a surgeon chooses their tools. 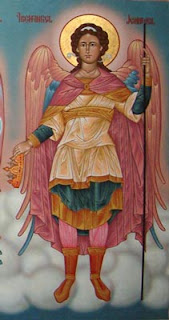 Jegudiel glows with an unearthly light - Cherenkov radiation ejected from its heart, a violently unstable reactor. Its breath ferries dust and ash out into the world, and the light of its heart goes with it. 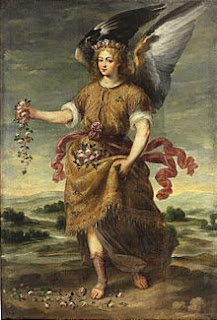 Barachiel is a guardian angel, in total control of the world around it. Doors open at its glance, machines scream and join it, augments rebel against their masters. Antennae sprout from its eyeless, blinded head, projecting its binary orders.
at December 27, 2019 3 comments:

BlueWolf from the OSR Discord requested: "General sci-fi dungeon room fills. Encounters, tricks, traps, treasures, details for ""empty"" rooms or means of travel between far reaches of the dungeon. One line per fill is fine. As many as you feel like. Gonzo is fine, doesn't have to be hard sci-fi."


1d6 Generic SF Dungeon Fill
1: Three small cone-shaped maintenance robots scoot past you, beeping. If you grab one, you can steal its tools.
2: A sec-droid questions one of you - they've mistaken you for a smuggler operating in the area.
3: In front of the locked exit is a slow pressure plate - you can walk over it safely, but if you stand on it for long enough to do anything, it electrifies the floor.
4: This room is dominated by a giant communications console, where you can contact the creators of the dungeon - this is only an outpost.
5: A research area for man-scale hyperspace travel. The prototype teleporter can be used to skip to any area of the dungeon, but it might not bring all of your stuff with you.
6: The door opens to a landing pad, with automated cargo ships landing, being unloaded, and taking off. The cargo lies abandoned (but watched) on the floor.

1d6 Cyberpunk Dungeon Fill
1: An "outdoor" office, with floors covered in plastic grass and a blue-painted ceiling.
2: An autotherapist, charging $1 a minute for its mechanized discussion.
3: Three medical robots carry a man on a stretcher, who desperately attempts to fall off and avoid the hospital and the debt it will bring.
4: A bioprinter used to mass-produce nutrient paste. If hacked, it can create other organic compounds.
5: A VR work farm, filled with dozens of workers. Stay completely silent - they are not used to sound, and panic will quickly turn them into a mob.
6: A prototype nanoplague held in a boxy cryocontainer. Want to touch it?

The Navigator Houses are the most important civilization in Sunless Horizon - as the assumed home of the characters, it'll be the first group the players interact with. Because of this need, it's more standard - a nice, easy to understand, feudal nightmare dystopia.

The 11 Houses are desperate - since the Retreat, they've lost most of their manufacturing capability, all of their territory, and all of their context. Now, they're frantically scrabbling to grab as much as they can before another House manages to.

The Houses
The 11 Houses all work on the same feudal framework, but conditions are vastly different between them. For example, in House Thamiel, the military is so thinly-spread keeping hold of far-flung territory that other factions have started to gain influence in the cities. House Harab Serapel has a long-standing tradition of councils - any noble position must be held by at least 2 people.

The Peasants
The vast majority of the Navigator Houses' population is in the peasantry - farmers, artisans, workers of all types. They have no power, no food, no money, and no medicine. They are taught little about the world - from above comes the belief of the Peasant Gods, and from within come their own superstitions.

Their money flows upwards, to the nobility - if they don't pay in gold, the nobles will take their tithe in blood. 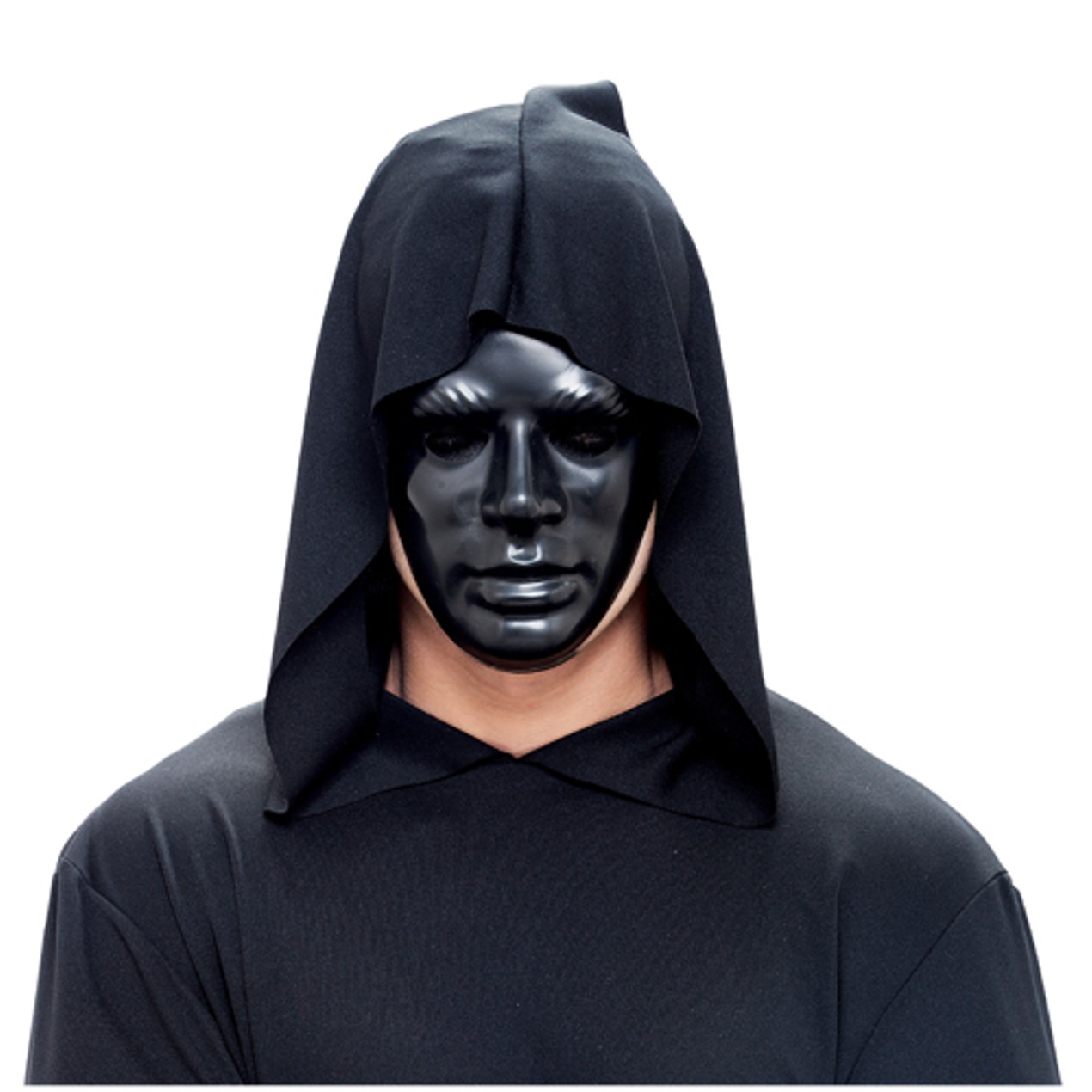 They stand 10 feet tall, hidden under baroque robes and masks. They never speak, communicating to their herald-interpreters in obscure sign languages. They say they are perfect and immortal.

Over generations, they have improved their bodies and minds, bending their flesh to their will. But now, their mistakes begin to reveal themselves. They rot from the inside, consumed by innumerable cancers and plagues.

They need flesh. Flesh to fuel the bioengineering machines that made them into what they are. Flesh to prolong their life, if even for a day.

As long as the tithes come up from the peasants, as long as the machines still function, they will never die.

Their Ranks
Banner-Bearer: Knights and commanders, though they hold no lands. They are expected to lead in battle.
Overseer: Leaders of a city and its surrounding lands - they have total control over the Watch, the taxes, the planning, everything.
Hierarch: Controllers of a province, taking taxes up from their Overseers, and leading their Army during wartime.
Lord Navigator: They lead the Houses, collecting tithes from the Hierarchs below. Once, they met in councils to decide the future of the Navigator Houses, but now they fight petty wars for territory and control.

Their Lie
The Lord Navigators are in control of the ship. Keter is simply a servant who broke His bonds. As long as the Navigator Houses stay stable, and the nobility stays in control, they will reach their destination.

Their Armies
Each Hierarch builds their own army out of soldiers offered up from their Overseers. These armies are used to expand their holdings, fight back against incursions from the wilderness, and keep their Overseers in line.

In times of true war, all Overseers have their armies commandeered by the Lord Navigators.

Their Jackals
The Jackals are scavengers, sent out into the cold halls of Ein Sof to return riches to the nobility. They are given nothing - no supplies, no training, no assistance. They are made of conscripts, the desperate, and the violent.