A recent challenge being pinged across the GLOG-y types over on the OSR discord is the Curse Class, where some outside event (a bite from a vampire, a message from a god) happens to you, and starts changing you. Let's do that, I suppose.

For years, Yosef Industrial Augmentation has sold nanoaugs - instead of a dangerous, time-consuming surgery, they use a set of nanites that enter the user and construct the augment out of supplied materials and pieces of the body.

Recently, they've turned these into weapons; canisters of nanites are fired from mortars into crowds, and released, deconstructing enemy forces and rebuilding them as mindless machines.

However, the weapon isn't perfect - sometimes, people exposed to the swarm have their mind left intact and in control. 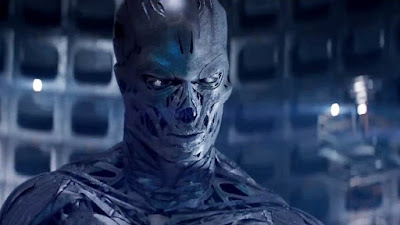 To remove Nanoweapon Poisoned class templates, you must destroy the nanites with EMP weapons - however, this will leave you without the parts of your body they have replaced. This is not lethal until class template D - if you remove the nanites before that, you can be saved by future medicine.

A: Zero Hour
The nanites have begun to consume your respiratory system. Your maximum HP is decreased by 1 (if this would kill you, it instead leaves you at 1 maximum HP), and your movement speed is halved. Once per day, you can cough up a stream of nanites, dealing 1 damage to you and 1d4 to everyone in 40' of you as the nanites attack them. The nanite torrent can also consume one object the size of a small dog.

B: Nanoaug Armature
The nanites spread, beginning to consume your skin. You lose all bonuses from armor as it is stripped from you, and your maximum HP is decreased by 1 (if this would kill you, it instead leaves you at 1 maximum HP).

C: Swarmform Process
The nanites have consumed your musculature. You are a mess of organs and bones held together by the nanites alone. Your maximum HP is reduced by 1d4 (if this would kill you, it instead leaves you at 1 maximum HP).

With the extra material, the nanites are able to project copies of you. You can release 2 copies a day. They have 10 in each stat and 4 HP. They can attack with hair-thin tendrils of nanites, dealing 1d4 damage.

D: Dissolution
The nanites have consumed everything, leaving you a cloud of disassociated neurons in the center of the swarm. You can fit through any space, and release a canister of nanites, dealing 1d10 damage at a range of 50'. In one turn you can consume a car-sized volume of inorganic material.

Bullets and other physical attacks no longer harm you, but you take double damage from extreme temperatures and electricity.
at August 02, 2019