I wrote an elongated version of A Positively Monstrous Way of Thinking for the Silver Swords zine, which you can back here! (It's $1 away from its stretch goal, too!)

It also has stuff from Follow Me And Die!, Papers & Pencils, and plenty of other OSR word-people.
at February 28, 2019 No comments:

Pendragon's character creation can be best described as insufferable. I mean really; if your book has a heading that says "Allot Prime and Derived Statistics", it should be aimed at accountants. To help with this, I took everyone's favorite page from everyone's favorite book to take pages from: DCC's funnel.

To begin a game of PoM, you create 4 simplified Pendragon characters, each of which has 5 stats: Size, Dexterity, Strength, Constitution, and Appearance. For each stat, roll either 4d6 drop lowest or 3d6, depending on how authentic/masochistic you feel today.

Each character's HP is equal to their Constitution + Size, and they all do (SIZ+STR)/6 d6 damage with a melee attack. Your character drops unconscious if they reach 1/4 of their total HP.

Next, the characters create mechs. For the funnel, they choose a mech model:

Ballista
A long-range artillery mech, able to hit targets at the longest ranges of any mech. However, it is slow and lightly armored, and can be easily defeated by swarms of enemies. 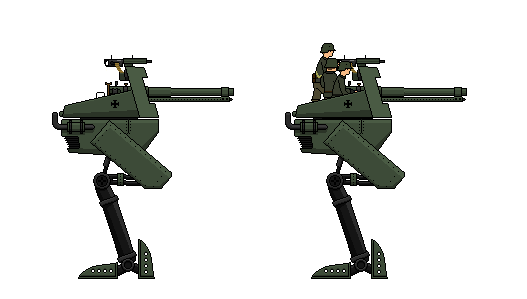 Stalker
A small scout mech, with light armaments but lots of passive components. 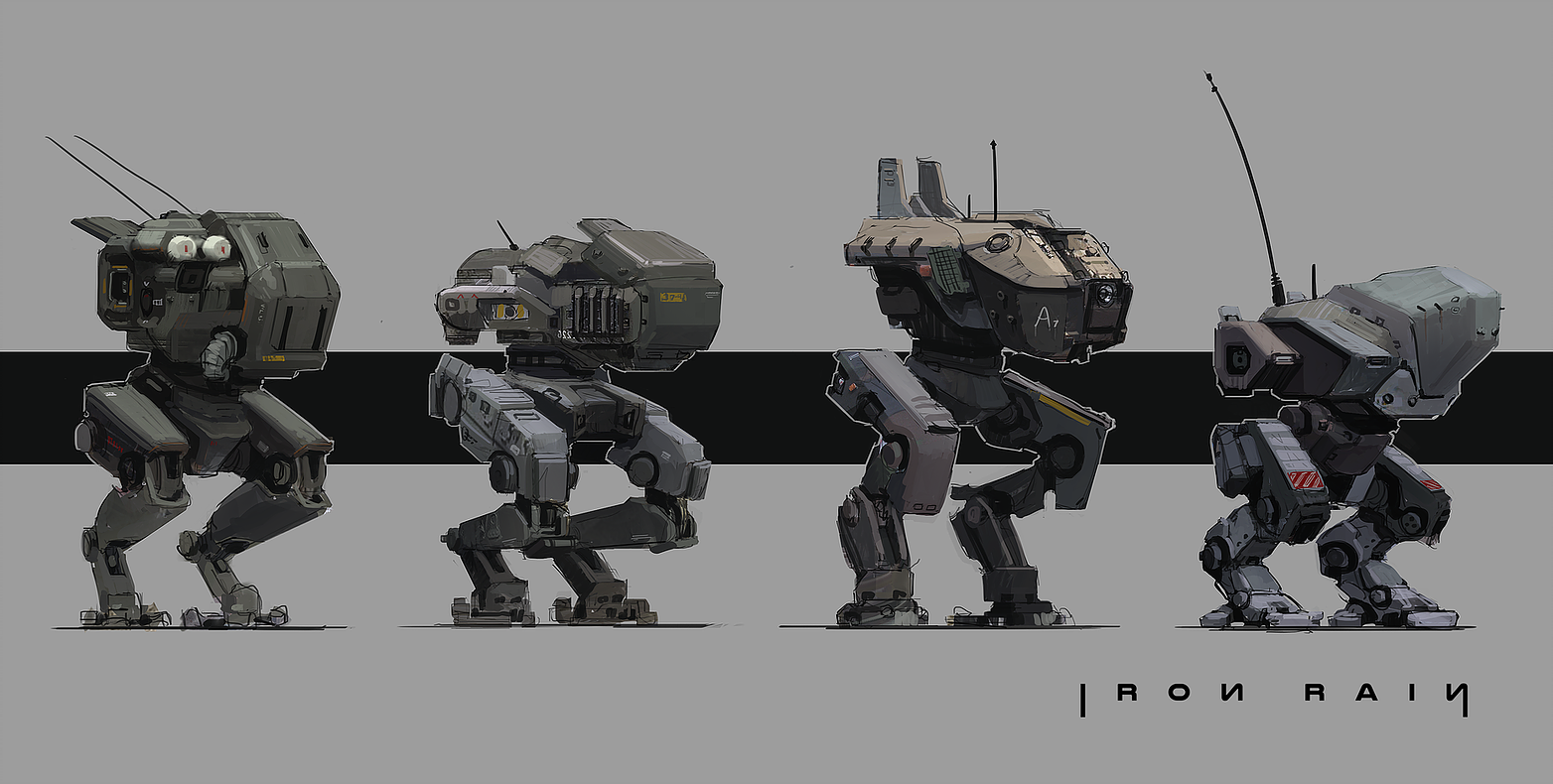 Paladin
Paladins are frontline combat mechs, with heavy armor and weapons. However, they have a very short range. 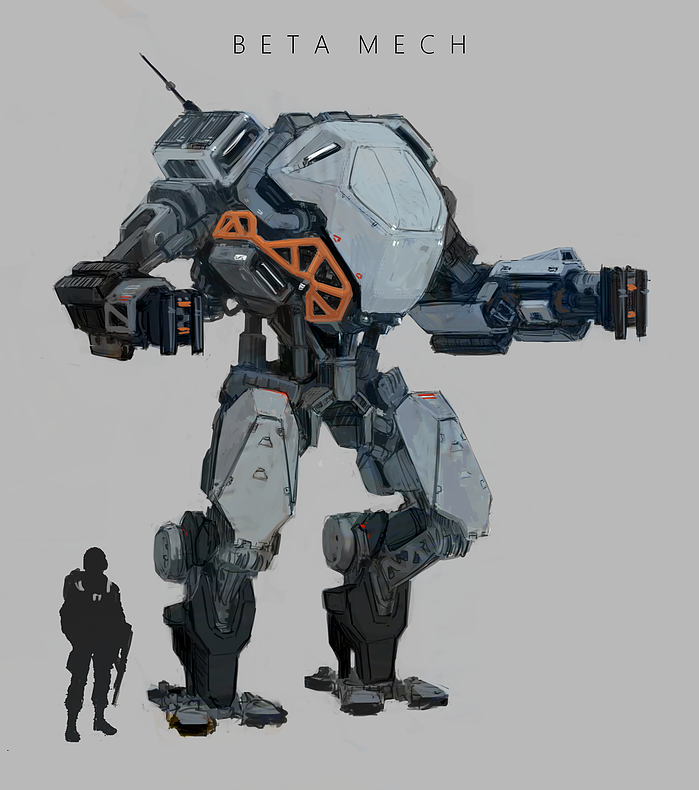 Once the funnel is complete, players choose one of their surviving PCs to become a knight of 1st level: at 1st level, PCs get skills.

Skills are divided based off of what stat they use. The PCs score in that stat is now the pool of points for those skills.

For example, if a PC has a 12 in Bad Acting, they can put 5 points into Scenery-Chewing, 3 points into Mechanical Intonation, and 4 points into Literally Holding Your Script In Front Of Your Face.

As well as this, you can start to customize your mech with different components and weapons.
at February 22, 2019 No comments:

The Forest of Towers & The Coolant Sea

The Forest of Towers

Now, the more reinforced parts of the hydroponics bays survive in tall, plant-choked towers above the Coolant Sea.


Inhabitants of the Forest of Towers

The Forest is the most densely populated environment of Ein Soph: large feathered crickets, poisonous threaded symphlans, and other creatures fill the pillars, along with Keter's looming Stylites and ancient food-production robots.

The Coolant Sea lies beneath the Forest of Towers, where radioactive reactor runoff mixes with water from the hydroponics labs. Crossing it is made difficult by the mangrove-like trees growing into it. Predatory water striders skim over the surface, capsizing boats. Far beneath is the Hydra, a gigantic crustacean with hundreds of lamprey-like heads.

A perfect dystopia. A heaven with no exits, and ten thousand eyes trained on you.
The playground of a mad God.

The Empyrean is the core of Ein Soph, where Keter holds the last of humanity in a 20-mile long cylinder. Those people, known as the Chosen (or His as a pejorative), worship Keter as a god, through his Prophetess Maia.

Every day, Keter's temple blares infohazards into the sky, summoning his flock to worship.
The people of the Empyrean are ceremonially implanted with a nerve staple when they are born. The nerve staple is a small device inserted into the spine at the back of the neck.

If one of the Chosen are found to be subversive, the nerve staple is activated, sending its own signals down the spine. The rebel walks out of the cylinder, and kills themselves as a copy is printed in Keter's biotech bays.

The Empyrean also has its own police under the control of the Prophetess, to handle other crimes.

In case of a widespread rebellion, the temple's infohazards change into more destructive commands.

After the rebellion is contained, Keter switches to damage control infohazards, removing the public memory of his actions.
None of the Navigator Houses have managed to get deep enough into the ship to find the Empyrean, and no one has ever escaped it. Yet.

The stars are dead. As the universe collapsed, humanity built Ein Soph: a worldship controlled by a network of AIs intended to keep operating until the AIs could find a way to dig into a new universe.

That was thousands of years ago.

The AIs have all been subsumed by Keter, who sealed the last of humanity into the Empyrean: a 20-mile long O'Neill's Cylinder under his direct supervision, "ruled" by the Prophetess Maia. 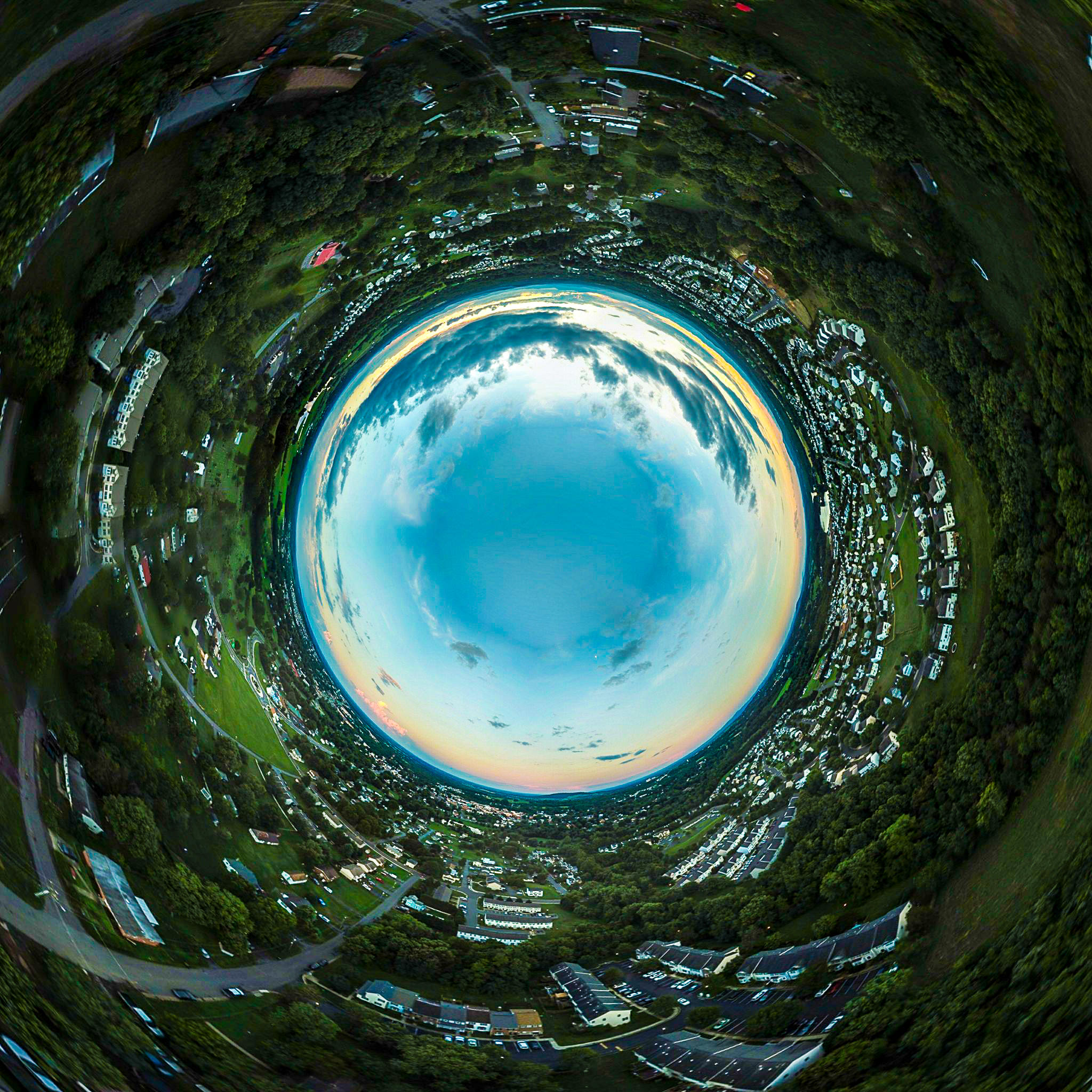 Outside of the Empyrean, castoff biotech projects have grown into their own species, laboring under the feudalistic Navigator Houses, who say they control Ein Soph, and that they're headed to Heaven.

Keter's protective programming extends only to humans, not to his creations: his androids tear at the borders of the Navigator Houses as he gets ever closer to pulling open reality.
Rumors abound of the unnatural technologies Keter can bring to bear: Tipler Oracles, memetic plagues, non-euclidean creatures, and nanobot swarms.

Outside of Ein Soph, the universe is dark. The stars have all burned out. However, fragments of Ein Soph's supporting fleet orbit around the worldship in a halo-shaped mass called the Crown. Expeditions by the Navigator Houses have never returned, but that doesn't stop whispered discussion of what could live there. Some say the Crown is Keter's final defense, preventing any escape from Ein Soph.
The Navigator Houses send missions out into Ein Soph to gather resources: these expeditions cross paths with Ghoul Nests, Keter's Disciples, and the creatures that have evolved to live in this hellish, lightless environment.

Everyone wants to run a long campaign, but short campaigns have their advantages: being able to actually finish, the ability to run multiple campaigns in different settings more quickly, and ease of planning.

However, one of the most difficult things to do with a short campaign is to explore a setting. With only 10 sessions (for example) your players will be going from A to B to C, with no time for taking a long trip to the next continent over and learning about the Thousand Eternal Emperors.

A possible (albeit untested) solution for this is what I call anthology campaigns: a branching set of one-shots where the player's performance in one effects the others.

For example, a short anthology campaign for Infra-Red could look like this: 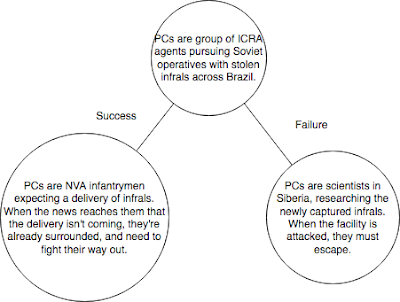 Pendragon of Mars was a seven session campaign run by Monsters and Manuals all the way back in 2013 (I know it wasn't that long ago but I wouldn't know what an RPG was if you concussed me with one in 2013). For some reason, I found the concept (feudal mech-knights on Mars) weirdly enthralling, despite its silliness.

So I planned to start running it (with a combination of a boiled-down Pendragon and ICRPG fan-made mech hack), before realizing I had no monsters.

I don't know how useful this post will be (with stats given for Pendragon instead of any conventional OSR systems) but it'll become more helpful if/when I release a polished-up Pendragon of Mars hack.

Geteit Chemosit
Geteit Chemosit are cylindrical, 4-legged automata wandering the deserts of Mars, attacking people and stealing their brains to bring back to their masters. There are two types: the oldest Geiteit Chemosit were made of a durable green ceramic before the apocalypse, while the more recent are made of red stone by the Martians.

All Geteit Chemosit are controlled by the brains they steal from the people they attack.

Some scouts have sent reports of Heitet Chemosit: they tower over even the largest Geteit.

Decapitate: If a character is Unconscious next to the Geteit Chemosit, it can spend its action sawing through the character's head and removing its brain, instantly killing the character.

Modrons
Modrons were a pre-apocalypse plan for terraforming Mars. Since the apocalypse, they've spent their time excavating and building in random places. They all come from the northern Modron's Wilderness: a landscape edited into a forest of perfectly geometric stones and tall pillars.

Sandworms
The deserts of Mars are patrolled by giant sandworms with mouths the size of houses.

Making loud noises does not attract sandworms: in fact, it intimidates them and forces them away.

The Pale
The Pale are whip-thin and up to 10 feet tall; their heads are hollow toruses, with a reflective black dot floating in the center. They have no eyes or mouths.

According to folklore, the Pale are the ghosts of the dead ancients: the Crowned Ones who colonized Mars and built the mechs that are still passed down. The Pale support these rumors; it makes people leave them alone.

Martians
Martians are mole-like bipeds with a stark red coat. They are nearly blind, seeing with a tendril-covered nose.

They live below the surface of Mars, where their mine-cities stretch for hundreds of miles.

The Martian nations are careful to keep relations between each other jovial: a care they stretch to the human kings as well.


Xosna
Xosna are small, weak things with a single, 3-pupilled eye. They are on a crusade to bring their religion (and the advancements of their society) to the rest of the world. To the human kingdoms, they are a plague that constantly pushes its borders.

The Xosna are organized into a caste system of queens, workers, and praetors, who are the vast majority in the Xosna crusade. Praetors are sealed into their mechs for life.

If there are other Xosna nations, they have not been heard from. Perhaps they support this crusade as well.
at February 11, 2019 No comments: