While I am technically a day late, it doesn't matter because time isn't real. Fight me.

It's the beginning of the year, which means it's time for me to look back on bla bla bla. You get it.

Unlike 2019, I didn't find any paid writing work this year. However, I supplied work on both Delver's Digest and Charcuterie Board, a pair of Discord-based community zines.

I also ran my first Kickstarter as part of Zine Quest, releasing King of Dust, a cyberpunk game. Along with that, I released another GLOG hack, the urban fantasy game Libra, and collaborated with Vayra to release a solo post-apocalyptic RPG, Canyon.

Most importantly, I completed the first public beta of Sunless Horizon, my SF-horror game, as well as being able to run a playtest campaign. This continues to be my most popular long-running project, and there's still more on the way.

Sadly, I'm not going to be doing a Zine Quest project this year. I'm under plenty of stress already with starting college and all that, I really don't need another deadline (and also the 5 things I've tried to write for it have all burnt out).

However, now that the Sunless Horizon beta is out, I'm hoping to get it at least mostly done this year, and publish it... somehow. I honestly don't know how it works help aaaaaaaaaaaaaaaa

Of course, blog stuff will continue as well, with no real schedule.

I said there's more on the way, didn't I?

As part of the new wider focus, I'm working on giving each faction a one-page section with everything the players need to know to play that faction - the idea being that the players all get together and choose one before the start of a campaign.

Each one has a description, equipment, a table of names, and 1d6 backgrounds, which have both a benefit and penalty. So far the only one complete is the Navigator House page, which you can get in PDF by clicking on the image below. 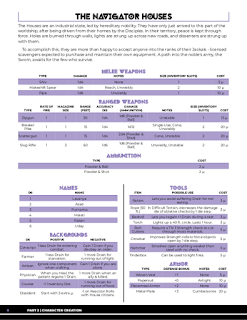 In the recent post containing Chris McDowall's solo RPG, Ask The Stars, he uses the oracle table within to create small 3-point settings. This seems like the most interesting use to me (mostly because of my constant drive to make more settings), so I gave it a try here, creating a few microsettings of my own.

First roll: Traveller, Exiled (wandering/chance, guilt/autonomy). So, we have a group of people leaving their homes. Our first question is that guilt/autonomy split - were they driven away, or did they choose to leave?

We roll - were they banished? A Hard Yes. But why? Another roll on the symbols and positions gives us Legion, Rooted (unification/identity, stability/plenty). Someone else moved in, trying to subsume their culture. But they wouldn't let go, and they were banished for it.

Now we know what's happening, but I want to know when. Is this the near future? A Hard No. Is it earlier? A Soft Yes. 1800s imperialism would be the obvious answer, so I want to skip it. Instead, it's a Cold War equivalent. Two superpowers, dragging smaller nations into their proxy wars. Our travelers are the losing side of one of these.

But what can the exiles do now? I roll Traveller, Twinned (wandering/chance, intimacy/dependency). A pretty easy answer, then. This has happened before - the whole region is up in flames. You could run, taking advantage of your good position with one superpower. Or you could band together, gather up members of other communities, and strike back against your common enemies, pulling your home from their sphere of influence.

Setting 2: What's Mine is Yours

For the first roll, I get Hand, Entombed (creation/misdirection, memory/death). Creation of memory, misdirection of death. Transhumanism? Immortality?

How are they doing it? Is it a science? Hard Yes. Some new technology has made this possible. Is it accessible to all? Another Hard Yes.

What else is there? I roll Eye, Exiled (judgement/secrets, guilt/autonomy). There's something being hidden here, possibly by the technology's creators. What kind of secret? I roll Elder, Waning (authority/tradition, hunger/decay). No secret of the technology itself, then, but of ideas surrounding it. The powers that be, grasping at it, thinking they can fit the genie back into its bottle. It must be new, then. But are they right?

Hard No. They are only selfish.

My first roll is Cage, Crowned (protection/obligation, ambition/ruin). A would-be tyrant. I roll again, to get more detail, and get Fang, Entombed (hostility/fear, memory/death). So, he is already a ruler over man, now, hoping to conquer their final fear - death itself.

Immortality seems to be common in these settings. But how can the tyrant reach it? Is this the past? Hard Yes. This is the furthest past, all the way back to the stone age. Do the players support their rule? Soft Yes. They are ministers of this desperate, dying leader, sent on quests to hunt and deliver the alchemical ingredients the tyrant believes will keep them alive. However, the rest of their time is spent in attempts to scheme their way into a better position when the tyrant dies.