The TeleGLOGela was a crime against humanity perpetrated by the OSR Discord. Twice.

Somewhere, in theory, there's something playable in it. In this post, we're going to look through the original TeleGLOGela, which you can read here, if you hate yourself.

We are not looking at the even worse second edition, which among other things has a set of rules for dentistry and also removed every J, L and C from the document. There is nothing worth taking from it, and it should be abandoned. However, at the end of this post will be screenshots of some especially surreal parts.

Remember that none of this (except some of it) is original to me. This is research, not authorship.

The TeleGLOGela's advancement system (or, at least one of them) is Names and Deeds, a player-driven variation of milestone experience. Every time a PC accomplishes something significant, they can choose to append a fitting Name to themselves. Each time they wish to append a Name, their accomplishment must be grander than the last.

Deeds are where the player-driven component comes in: at any point, the player can swear to complete a Name-worthy task. If they succeed at this, they can choose two bonuses instead of one. If they fail, they lose "an ability" of their choice.

The book also recommends using Names as a type of currency - giving it away to demons or other things in exchange for power.

Along with the common Shields Shall Be Splintered rule, where a shield can be sacrificed to lower the damage of a physical attack by 1d12, you can sacrifice a Skill to add 1d12 to a Save against a mind-altering effect.

Spellcasting works on the same system. Once a spell is found (for they are all found, and never known), you cast it by choosing to sunder up to 4 Skills, gaining 1 MD for each skill removed. MD can also be gained from natural means such as ley line intersections, some specially-built architecture, and sacrifices.

Sacrifices must be done in a specific way. You must take two opposing things (fire/water, metal/plants, etc.) and give the lesser to the greater. Plunge your last torch into a pool of water, abandon your sword in the weeds. These sacrifices must be of something needed. You can't throw a sword away when you're carrying three more, because you didn't really need it.

The TeleGLOGela also recommends that some classes must be unlocked during play. While its ideas of what unlocks classes are all surreal (destroying the moon, finding an orb, inventing a medical technique, and killing (N ^ 5) + 1 cops are all options), I've played some GLOG campaigns where this was in effect, and thought it worked very well.

Not only does it give your players something they will definitely want to do, it also lets you slowly ease players into weirder games: start off with a Fighter, Thief, and Wizard, let them unlock the Flying Psychic Eyeball Man.

The scattering of the Cleric class, and its replacement with a more accessible form of religious magic, has become a widespread idea over the last year, but it is rarely reinforced with mechanics. The TeleGLOGela not only has this reinforcement, but does it excellently.

It instructs vows to be given in 4 parts:

And divides them into 4 categories of effectiveness:
It also comes with guidelines for the GM on how to handle different types of offerings for vows. It is by far the most complete set of divine intervention rules I've seen in any game.

Email ThisBlogThis!Share to TwitterShare to FacebookShare to Pinterest
Labels: GLOG

You are a somewhat pathetic mountain: two feet tall and about 260 pounds, dragged along the ground by thousands of tiny legs (as all mountains are) at half standard walking speed. You have no hands, but can communicate (slowly) by vibrating.

You are automatically hit by all attacks, and cannot wear armor. However, you are immune to poison, disease, most fire, and other things that wouldn't affect a rock. You take half damage from physical threats (claws, swords, etc).

Every template, your height & width increase by 1 foot, and your mass increases proportionately. 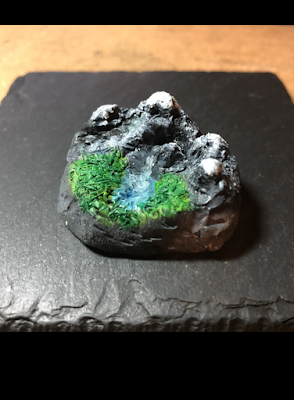 A swarm of birds, each about the size of a gnat, have started to live atop your peak. You can politely ask them to do things for you. Together, they can lift 5 pounds.

You can sacrifice HP to do an equal amount of damage to a target if the target is either shorter than you or below you. This does not require a roll to-hit.

A village has been built in your foothills. Together, all the villagers can lift as much as a human, build as quickly, and otherwise be treated as a single human. It would be polite to warn them before a landslide.

You can sacrifice HP to do an equal amount of damage to a 30' radius, and cover the area in lava, if the area is below you. Of course, I expect there are many other things you could do with lava.

Email ThisBlogThis!Share to TwitterShare to FacebookShare to Pinterest
Labels: GLOG, Not Funny

Edit 8/3/21: Updated to Version 1.1, fixing errors, expanding the Pipe Contents table, retuning Supplies, and adding guidelines for computers. Added a link to Owlbears & Chickenhawks' OL519 content. Links to supplemental content will continue to be added, but not recorded in edit logs.

In this post about a derelict-crawling GLOG I said "This is just classes, and it probably won't go further than that". Well, it turns out I'm a liar.

Orbiters Local 519 is a GLOG hack using those classes, built for an open table or set of disconnected one-shots. In it, the PCs play a group of scavengers sent to recover delicate resources from wrecked starships. It has two important differences from your standard dungeoncrawl, however: one of them is simply the 0g environment, but the other is more interesting: destructibility.

Generally, a dungeon will stay physically the same when the PCs enter to when they leave - maybe they'll kick down a door or two, but they won't be caving in rooms. In Orbiters Local 519, not only will they be tearing through walls, but the derelict will be falling apart on its own. Pipes explode, gravity falters, derelicts spin, and entire rooms can tear off from the structure.

Click on the cover to read the most recent version of core book's PDF (currently v1.1), and the links below to take a look at some example derelicts and expansion content. 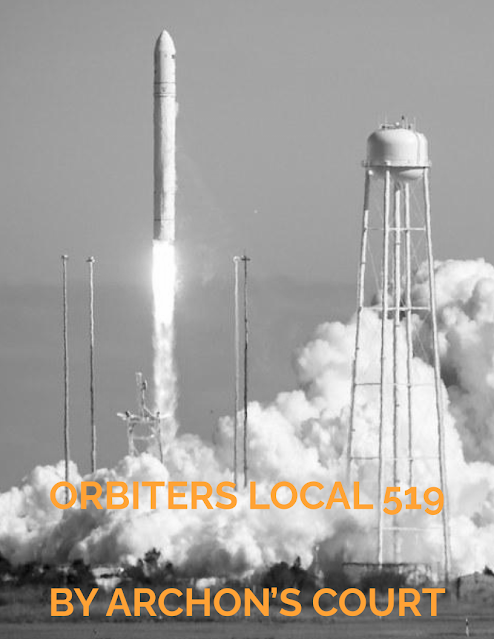 If you would like to look at Version 1.0 instead, here is a link.

A Navy railgun corvette was destroyed in a skirmish about 7 months ago. No survivors are expected, and sensors are picking up a radiation leak. Hopefully you can get in and out before the Navy realizes we're here.

A biology research ship, destroyed by a power failure incident. The AI, Pythagoras, should still be online. Most of the habitat domes are still in one piece, and we have no idea what could be inside. We shouldn't be facing any competition for this one, feel free to take your time. As much as you can, anyway.

BUGS AND BLASTERS, by Lichesgetstitches (Hack)

LUCIDITY IS NOT A POSSIBILITY, by deus ex parabola (Derelict)