This was the first session of Orbiters Local 519, back before it was fully complete. Luckily, the game really didn't change much during development (though I'm working on a couple small fixes), so it's still a good example.

The events of the game are in standard text, quotes from PCs or players are italicized, and GM advice & important concepts are in bold.

Xenophon of Athens - Agarwaen, son of Umarth, Controller A

The salvage team approaches the ISK Halamandaris in their boxy, yellow-painted Transport. The ship's habitat domes are shattered, and luminescent jellyfish shine like neon stars around them. One engine nacelle is gone, leaving a long tear through the hull, and the bridge window at the front of the Halamandaris is shattered.

The PCs enter the bridge after a vote, where only Xenophon dissented.

Mihau: "I want to go through the rear airlock, but all the cool people want to go to the bridge."

Abrams & Madgalene carefully drift through the shattered bridge window and tie themselves to the remaining consoles. Abrams checks the walls and doors with the thermal scope of his tranquilizer rifle, finding a snake-like shape swimming through the inside of one wall. The rest of the team enters as Madgalene seals the room's vents with foam, hoping to keep the creature out.

Ish splices his coffeebox (a briefcase-sized battery, used to power systems on derelict ships) into one of the computers, which comes online and displays the ring-and-sphere logo of the Tau Sigma Terraforming Group. 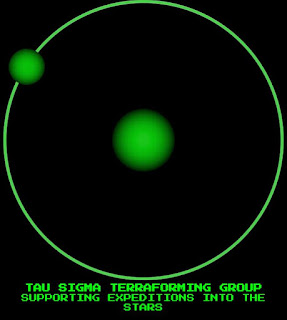 Abrams keeps his rifle trained on the shape as Ish searches through internal documents & reads through logs. A few weeks after the last captain's log, and after the ship was reported derelict, the computer recorded a security system override - lethal force, target all non-crew organisms.

The computer was all improvised except the security override - this was a mistake which came back to haunt me in later sessions. It's best to give a computer three things - Security (some computers might be open to everyone, but others may need passwords, fingerprints, transponders, or simply be completely inaccessible without being hacked by a Controller), a Start Screen (usually explains what it's for, or at least makes a nice bit of description) and the Content (a list of both everything the computer can do, and every important file on it).

The rest of the group wait, wary of the Hardsuit Operators:

Oyld: "Remind me why you two aren't in the military?"

Ish: "I was. Now I'm not. Long story. Short story, actually, I just don't like to talk about it."

Ish finds references to the ship's AI, Solace, and Agarwaen tries to use the console to send messages to it, but transmission to and from AIs is heavily sanitized - the consoles aren't allowed to send anything to the AI, and Solace can only send information its archived, not things it's written. Instead of spending a Program Slot to override the console, the salvage team decides to dismantle the consoles.

This part of the session included another improvised concept that worked much better than the computers: everything on ships is well-labelled. Power cables say [Reactor <-> Hydroponics Pumps], pointing the way to both. Bundles of fiber-optics are labelled [AI Input], or [Observatory]. These labels help in two ways - first, they give the PCs extra information, and let them make changes to the derelict in ways they understand, instead of chopping away at wires and hoping something good happens.

Second, once the players get used to well-labelled ships, you can change things. A freighter rebuilt from a mothballed warship, with power cables saying they go to the Particle Beam Array when they actually control the galley lighting. A ship from a budget manufacturer with no labels on anything, so the players have to guess (or try to figure out the role of the wires based on color).

Once the bridge is torn apart, they drift out the window, grab the Transport's netting, and fly to the ship's rear airlocks. On the other side of the airlock is a locker room, with a deactivated TV and camera along with two doors: one left, with stacked-up crates on the other side, and one right, leading to the Halamandaris's jammed-open shuttle hangar.

Abrams & Ish activate the TV and download its contents (mostly nature documentaries), while Madgalene creeps into the cargo bay and retrieves the contents of a crate labelled "generator": foldable solar panels, tiny wind turbines, and a gas generator that might be older than the Mars colonies.

Agarwaen inspects the camera, finding a cable marked [AI Input], then tries to communicate with Solace in a... less than polite way.

As the generators and TV are loaded on to the transport, Oyld grabs packets of Meat Discs™ from the cargo bay, and passes them out to the team. They decide to leave the camera intact, weighing its value against the possibility of angering Solace.

Then, they leave, with Agarwaen setting a laser gate on the door to the hangar. They float through the cargo bay, and into a fuel storage room, which they mark as Volatile. Big Ish barely squeezes into a maintenance shaft, putting him into the remaining engine nacelle. Inside, he finds something - a slab of non-heat-sensitive plastic explosive, pressed to the inside of the engine. Its detonator had gone off, but not set off the slab.

He carefully scrapes it off, and Agarwaen tests Tools to print a remote detonator, planning to use the bomb later. The nacelle is marked, and they return to the fuel storage room to find one of the tanks starting to leak. Madgalene uses some more of her foam to plug the hole, and Abrams makes a detailed check over the tanks using his thermal scope, since small leaks or cracks would have a different temperature than the heated tank.

The breached tank was a Creaking roll, but the PCs had fixed the issue before it escalated - before that, there had been a Creaking roll (and subsequent Decay) causing the ship to turn, which was so irrelevant that it didn't really come up in the session or the report. A later version of Orbiters Local 519 will have that result changed.

Then, they check through the main door of fuel storage, finding a hive of metal-shelled barnacles devouring a floating jellyfish. The PCs quickly discover their shells are impervious to bullets, but a shot from Big Ish's hardsuit railgun causes one of them to flail its spiked tendril, hoping to strike its attacker.

Abrams thinks for a moment, then unwraps his package of Meat Discs™ and throws them to the barnacles, shooting them when they open up to grab the food. He fires his tranquilizer rifle at the last of them, then digs it out of the floor, hoping to keep it for study.

Returning to the Transport to store the barnacle, they run into a pair of hovering security drones. One is deactivated successfully by Agarwaen, but the second fires a flashbang into the room. While everyone failed their saves, Agarwaen still succeeded on initiative and initiates Deactivate Security System again.

Here, I made a mistake - Agarwaen had placed a laser gate on the only other entrance to this room, and it should've done something.

And has a problem - electric feedback fries his nerves and he feels like someone's grabbed him by his lungs as his HP hits 0 and his maximum HP is halved due an Injury roll.

The rest of the team still disoriented, panic as their hacker gasps and wheezes for air. After making sure both drones are disabled, they work together to pick him up and carry him to the Transport. Once he's stable, they return to the Mothership, which closes with the derelict and dissects it with its dozens of laser cutters.

As Agarwaen is taken by the salvaging company's medical team, the rest of the group settle in to their rooms. It'll be weeks before the Mothership reaches their next target.