Disclaimer: a review copy of this game was provided for free by the author. This review is based off of a reading of the book, not a playtest.

Star Dogs, by Michael Raston, is a recently-released space opera OSR game built off of a d20 roll-under system. 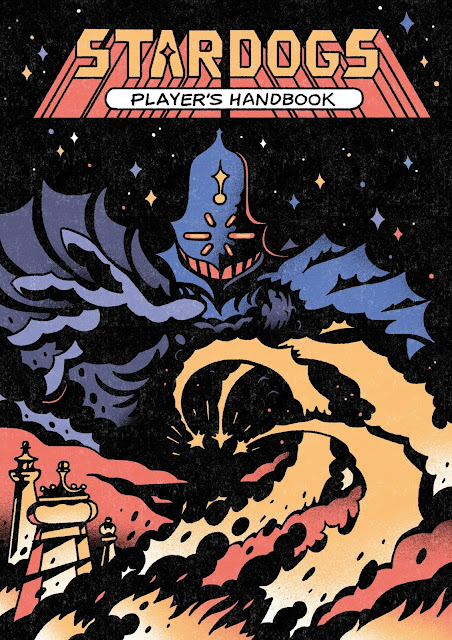 The races are interesting - some having simple stat bonuses, some starting with implanted augmentations, and one starting with the ability to be resurrected.

The 10% chance for Khybe Sensitivity is an odd choice - restricting a class to a random roll is unnecessary and not particularly fun, because you don't have another chance to receive that ability during play. Compare this to random equipment rolls, which mainly affect your character during the early game.

Boons and Banes are a good way to easily add variety to low-level characters, but Boons and Banes are very unbalanced against each other. For example, the Skillful Boon gives you +1 to a skill of your choice, while the Banes are things like missing a limb or disadvantage on all ranged attacks forever.

Between the changing die sizes, Advantage/Disadvantage, and Skill system, Star Dogs' main system is overcomplicated for my taste, with no real benefit. The system of changing die sizes is solid enough on its own, and would be a good addition to most roll-under games. If the skills were more connected to the stat system (for example, if having an applicable skill decreased your die size by one step on stat checks), that would help reinforce both the changing die sizes and base system.

The fast healing and Quantum Inventory help speed up the game - fitting it's heroic, space-opera tone.

Strangely, the Augmentations section has 4 pages of augmentation malfunctions (almost all of which, like "Something is growing from the augmentation, something foul and disturbing." or "Will eat those impacted and targeted by augmentation." really do not fit with the tone presented by the rest of the game), but no example augmentations.

The Khybe Casting system is odd - a somewhat freeform system that simultaneously is incredibly restrictive. It's point-based, with each point spent opening a new effect - for example, a 2 point casting can affect "The PCs own physical body." This is all the game says for the effect of a 2 point casting.

Extras
While there is no bestiary, there are some guidelines for creating NPCs for the game.

Conclusion
Star Dogs has some deep system issues, but the roll-under die changing is an interesting method for skill checks, and a polished version of the Boons & Banes would make a good addition to any OSR game looking for more early-game character differentiation.

The space opera tone is sabotaged by the horror-style augmentation failures, but bolstered by the quick health regen and Quantum Inventory. A range-band combat system helps keep it fast, but immediate death at 0 may be too lethal for people more used to Death and Dismemberment tables, knockout periods, or other similar additions.

I would not buy Star Dogs in its current state, but I would keep an eye out for any updates, supplements, or new editions.

Thanks to Michael Raston for sending me this review copy.
at November 21, 2019