Libra is a (shockingly incomplete, in retrospect) modern occult GLOG hack I made late last year. Now that I've started a campaign in the system, that incompleteness has become glaring, and so I'm working on a short series of posts to fill gaps in the game, possibly culminating in a second edition.

First is a system for car chases heavily based on this system by Ten Foot Polemic.

All cars have three stats, ranging from 1 to 3. These stats are:
Speed (SPD) - both the car's top speed and its acceleration. SPD does not affect the car's speed in overland travel.
Handling (HND) - the car's ability to turn and brake quickly, avoiding obstacles.
Durability (DUR) - how resistant the car is to damage and how effective it is when ramming.
When you roll a check using your car, pull Zener cards equal to the stat and have the driver guess one card that was pulled. To roll an opposed check, or to determine things like ramming damage or movement per round, pull Zener cards equal to the stat and read them (Circle = 1, Plus = 2, Waves = 3, Square = 4, Star = 5).
If you're using a regular system with dice for normal people, either use the stat as a bonus to a d20 roll, or add 10 to it and use it as a target for a roll-under system. 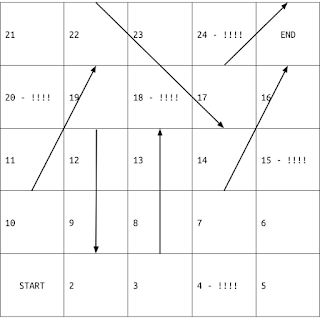 Chases have two groups - the Pursued and the Pursuers. The Pursuers start at the START point on the board, and the Pursuers start 1d6 spaces ahead.
On a turn, you pull Zener cards or roll d6s equal to your Speed and move that many spaces, either forwards or backwards. If you end up on a space with a !!!!, the GM rolls an Obstacle. If you land on a space with a line on the top, you follow that line to the arrow. (Both the line and arrow are at the top of their respective spaces - for example, landing on space 10 brings you to space 19).
If you are in the same row or column as the other group, you have line of sight, and everyone in the car can also take combat actions. You are 100' away for each space in between you and the other group.
If the Pursued make it to the END or START spaces, they escape and the chase is over. If the Pursuers land on or pass over the space the Pursued are on, they catch up. The same happens if the Pursued turn around and drive past the Pursuers.
If the Pursued are NPCs, they must immediately check Morale when they're caught up to. If they fail, they come to a stop and the chase is over. If they succeed, the Pursuers must disable their vehicle to end the chase. If the PCs are being pursued, it's their choice (though car crashes are dangerous enough that they may want to stop).

When you shoot at a car, either (if playing Libra) invert its DUR (3 turns into 1 and vice versa) and draw that many cards for the hit check, or (if playing standard OSR games), double its DUR and add 10 to determine its AC.
If you hit, a random passenger is damaged.
When you use heavy weapons such as explosives or anti-material weapons against a car, it is destroyed immediately.
When you ram a pedestrian with a car, draw both SPD and DUR (or roll that many d6s) and deal that much damage. When you ram a car with a car, make an opposed DUR check. The losing car is disabled, and all passengers take twice the excess in damage.

When the PCs land on a space with an obstacle, roll 1d8 on this table to find what they're confronted with. These obstacles are meant to be avoided - the PCs are free to act in any way they wish to avoid them, whether that means skill checks, psychic abilities, or use of equipment.
1. A red light. You cannot move on your next turn, unless you want to drive through cross traffic.
2. Potholes. Draw one less SPD card next turn.
3. The bridge is out. You cannot move next turn, and your movement after that must be in the other direction, as you look for another route.
4. DUI checkpoint. You cannot move next turn, and the car will be searched by the police.
5. A car accident's blocking the road. Draw two less SPD cards next turn.
6. A drunk, tired, or distracted driver veers into your lane. If you don't do something, you'll crash.
7. Traffic jam. Draw only 1 SPD card for the next 1d4 turns.
8. You're stuck behind a truck carrying gravel, pipes, or other badly-secured items. Until you pass them, there's a 1-in-10 chance each turn that something falls from the truck (treat as a gunshot into the car).
Depending on your game, you might add extra obstacles - for example, supernatural events (awakening the Road Dryads, who must be persuaded to allow you onto the road) or post-apocalyptic disasters (pre-War minefield).
at July 18, 2021 1 comment: