Review Some GLOG-likes? Why Not? (Rat on a Stick, Owlbear Stew, Moonhop, DIE TRYING)

The GLOG is strange, when compared to other OSR systems: while best known for its levelless magic system, its easy multiclassing and utterly ridiculous amount of classes give it a high focus on character building (for an OSR system, at least). Despite this, it is one of the most active parts of the OSR community. And whenever there's an audience, there's hacks. It seems like everyone who writes about the GLOG for long enough puts together some new version (including me cough cough), giving us a simple question: which of these are the best (according to some guy who wouldn't know an RPG if you hit him with it a couple years ago).


Rat on a Stick

To many people, Skerples' Rat on a Stick is the original GLOG: the first thing to rise from Goblin Punch's weird primordial game-soup.

Overview
The Actual Review Part of This Nonsense
Rat on a Stick's main problem is the combat system: instead of a faster d20 against AC, it has math, the bane of my existence. Rolling under a stat + (10 - another stat) for each attack is cumbersome and hard to explain.

The race table is one of the best parts of the system, and easily pulled out and used in a different hack.

Owlbear Stew, created by Meandering Banter, is a good example of what I think of as a second-generation hack (because I'm pretentious): it obviously shares most of its words-DNA with Rat on a Stick, but adds new secondary rules and character creation options.

Overview
The Actual Review Part of This Nonsense
Owlbear Stew is less like stew and more like a box of (sometimes exploding) chocolate: it's less a complete system, and more a load of mechanics to take things from.


If you plan to take mechanics, I'd recommend Mindsets: if you give them to your players at character creation, they're a really easy way to add some character differentiation (along with a small personality trait). Gambits are also very common in later GLOG hacks.

To be honest, I'm not sure if this is more of a GLOG hack or an ItO hack. Either way, it is a very interesting game, with mechanics far from more conventional GLOG hacks.

Overview
The Actual Review Part of This Nonsense
Moonhop is probably the easiest of these hacks to run at the table: between its short size and easy character creation, players can read it and prepare for the game in minutes. The backgrounds also show a strange setting, with options from medieval squires to starship engineers.

Unlike Owlbear Stew, Moonhop has few extra rules that could be taken - this helps the book be half the length, despite its large text.

DIE TRYING is a 2nd edition of Owlbear Stew, with an expansive classless character creation system.

Overview
The Actual Review Part of This Nonsense
DIE TRYING has one of the longest, most complex character creation system in any OSR game I've ever seen. While many people will certainly have a problem with this, I find it excellent. Outside of that, it stays very similar to Owlbear Stew.

The improved organization when compared to Owlbear Stew is very noticeable. As well as the better organization, it's also 10 pages shorter than Owlbear Stew. This does remove many of the interesting extra rules found in Owlbear Stew, but they can easily be picked out of that game and placed in DIE TRYING. (I also like it's name the most.)

The Peasant Gods of Sunless Horizon

Many of the commoners of the Navigator Houses believe in the 3 Peasant Gods, and keep small shrines to them in their homes.

The nobility have their own gods. You may not speak to them.

Capra did not speak as he consumed the fire. It was not his place to complain.

From his blood his lord fed.

And Vulpes appeared in front of his lord, and spoke of the crimes of the people. For this, he was rewarded.

Wormgod's Harvest is a biotech fantasy setting where the Wormgod consumed the world.

Bladebugs are throwing weapons that fly nimbly towards targets before slicing through them with their sharp exoskeletons. They barely do any damage because of their small size, but they never miss, and can be thrown in groups of 3 at once.

Smokers are a variety of flying squid bred and Shaped for lessened flight ability and larger ink sacs. When hit hard, they panic, filling the air with ink. Small Smokers are thrown to create smokescreens in ground conflict, and larger ones are launched from bioships to blind opposing vessels.

Knifelizards are small reptiles with bladed tails: when pressure is applied to their sides, they straighten out and stiffen.

Ansibles are frog-like emergency comm systems usually attached to bioships: when fed a colored pellet, they send an ultrasonic message based on the pellet given. While the Ansibles are the fastest way to communicate over long distances, they can only send a few types of messages.

Messenger Birds are an alternative to Ansibles: while they are slower, they can send more complex message. They memorize things they hear and repeat them to the target of their message.
at April 16, 2019 No comments: 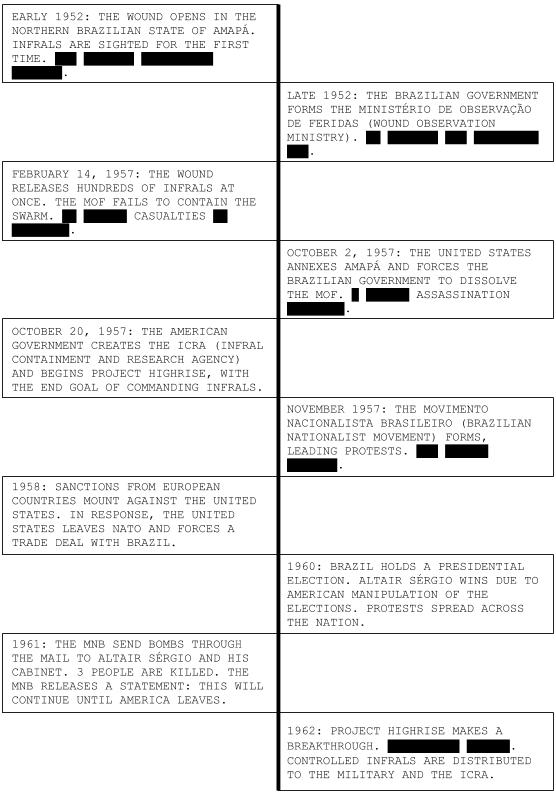 Is everyone tired of Sunless Horizon yet?

Weapons in Sunless Horizon are (simply to help me organize them) set into 4 groups: Cheap, which are smashed together out of hull plating and wiring, Decent, which are actual guns put together by people who know how to make guns, Expensive, for the nobility and their guards, and Artifacts built by the original owners of Ein Soph. Artifacts cannot be purchased.

It's a stick. You hit people with it.

Canguns are empty cans filled with an explosive charge, then nails or shrapnel before being resealed and attached to a stick. When the charge is detonated, it creates a horrific wave of red-hot metal, tearing through everything in front of the wielder.

Of course, the problems with this weapon should be obvious. While it's shockingly destructive even against Disciples, the shrapnel doesn't always go in the right direction.

Used to kill Disciples, Talon & Fang is a combination of 2 weapons: the talon, a short crowbar-like prying tool, and the fang, a thin serrated knife.

The talon is used to pull at the casings of Disciples to reveal internal components and wiring, which is cut with the fang.

Circlet Security's weapons are made from yellowed, brittle plastic and thin stamped metal. Stories abound of them fracturing or shattering when dropped, or shaking apart from the force of their underpowered rounds. Despite this, Circlet Security surplus is common among scavengers.

The weapons of the nobility are strange, focusing more on appearances than true effectiveness. The Long Hand is a intricately carved metal club on a long rope, swung in long loops before striking with gathered inertia.

The long wire is used to subtly manipulate the head, making it more difficult to block. It can also be used to entangle other weapons.

Ashford & Crane is the oldest weapon designer on Ein Soph, responsible for the weapons of the nobility. The Temperance is a large heavy rifle, loaded with the highest-quality powder and explosive shells.