At the start of summer, I started a campaign the newest edition of Sunless Horizon. It's currently on hiatus, but we managed to play a couple sessions first. This is a slightly newer edition than the public one, but everything should still make sense. The campaign started with the Response Engine, a funnel-style campaign start.

As a warning, this play report includes depictions of the following: body horror, torture, brainwashing, and violence.

The Meddler - Xenophon of Athens

The four characters dropped into a humid, brightly-lit metal room, with dozens of large tubes attached to the ceiling and a heavy coating of thick, reddish-brown liquid on the floor. However, they hadn't dropped into the same humid room.

I and the Instrument had landed in the eastern Growth Chamber, along with a few other clones, while You and The Meddler had landed in the western with a couple more clones and something else - the Hanged King; a pale crawling creature the size of a bus and with a single immense arm, gnawing desperately on something they couldn't see.

While they choked and spat the growth medium, words projected into their eyes: Please move to the Activation Chamber for infohazard injection and psychological testing. An arrow pointed them south, to a metal sliding door. 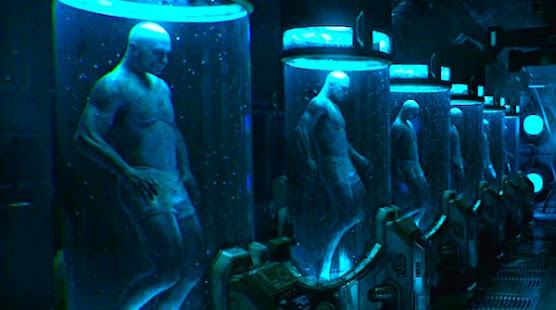 While the Instrument and I followed instructions, moving towards the Activation Chamber, the Meddler entered a dilapidated side hallway.
The Activation Chamber was a large room, with a + carved into one wall. Their headsets played another message: Please give the + your full attention. Both of them complied as a hidden projector played an infohazard, filling the room with images of authority and punishment, centering around a single fact: Keter loves you, and you love Him. He knows what to do, and will instruct you. The Instrument's mind opened like a flower, and closed around the idea. I kept looking, but their subconscious resisted the instruction.
A tube on the room's ceiling dropped two sugar cubes. Thank you for your cooperation.
You and the Meddler continued through the ruined hallway, only to find it leading into their version of the Activation Chamber. Both of them covered their eyes as the infohazard played. They could, just barely, hear someone screaming in their Growth Chamber.
All four of them then begin the second stage: cognition tests. A set of circles appears on the wall:
O
OO
OOO
OOOO

along with a one minute timer. After a minute of panic (and obstinacy on the part of the Meddler), culminating in the Instrument shouting "Ten!", they failed the test, and their headsets administered punishment: an electric burning sensation shooting across their faces.
As the second test (O + O, OO + OO, O - O, OO - O) began, You and the Meddler heard an immense crash as something tried to break through the Activation Chamber's door. Both groups passed the test, and were given another cube as the headsets instructed thank you for your cooperation. please face forwards for Registration and every wall flashed white.

The doors unlock, and both groups move into the single Assignment Chamber, meeting each other for the first time. This is also when Mihau's character decides that now that there are four of them, they need names: they name themselves I, Kent's character You, Kahva's character (now muttering constant praises to Keter) the Instrument, and Xenophon's troublemaker the Meddler.

Inside the Assignment Chamber are dozens of opened lockers, and a single breaker box marked with a lightning bolt. The Meddler immediately proves how much they deserve their name by opening the box's front panel and flipping each switch, plunging the room into darkness and opening every door. Then, they sprint to the lockers and loot them as the others try to find their bearings, grabbing a set of clothes and a bottle-sized square battery. As I lunges for the breaker box, the Meddler moves through the southern door into a garbage-filled room. When I turns the power back on, the doors close and a snap echoes through the Response Engine as a door shuts on the Hanged King's arm.


You, I, and the Instrument continue to loot the lockers, finding three sets of paper-like clothes along with a gray nutrient bar and two 30 foot lengths of rope. The Meddler sees that the room he entered is dominated by an immense nest of skin, plastic shards, and rotting meat. Shattered crates, larger than a person, lie strewn around the room.

Another message appears: the Response Engine will be reaching a Black Zone in 3 hours, 2 minutes, 32 seconds, 21 milliseconds. please decelerate the monorail using the control center on the upper level.

The three in the locker room start to hear scratching, and a coughing voice.

"in... i-in, let in. cold, let in, alone?"
They recognize that this is the Hanged King, and are absolutely certain they're never going to open that door again. At this point, I makes an odd decision, climbing on top of the Instrument to give themselves a safe place to stay.
The Meddler continues to wander through the Engine, finding a room marked "Liquid Oxygen Storage" then returning to the nest room as the other PCs arrive. They continue south as they hear a crunch - the Hanged King shattering its own bones to fit through the halls of the Engine. This new room is covered floor to ceiling in sketches of stick figures giving offerings to an immense, one-armed thing. The ground is covered up to their ankles in rotting, maggot-infested meat.
Meddler begins to poke at the Instrument - who is Keter? What does He actually want? However, the Instrument evades the questions.
Looking south shows a message:  area off limits to A section subjects.
Unsurprisingly, Meddler took this as a challenge and walked right through the door. They could barely see more lockers as a burning, electric pain clouded their vision. This Assignment Chamber was damaged, however - a small hole in one of the walls led to the hallway with the two staircases. Both of them had blood dotting the first and third stairs, so the Instrument stepped on the second as Meddler looted the second Assignment Chamber.
The Instrument had, sadly, made the wrong decision and the stair snapped under his foot, dropping his leg into a small spike-filled pit. (The second stair wasn't bloody because it gets replaced every time the trap goes off. The first and third don't, so the blood stays on them.)
I and the Meddler rush to bandage the Instrument's bleeding leg, as the Meddler takes the lead upstairs into cramped hallway illuminated by a buzzing light. They check both doors - one has footsteps behind it, and the other has a crude drawing of a spear. They choose the second, finding another staircase leading upwards and a mural of stick-figures, armed with spears, fighting against masked people twice their height. 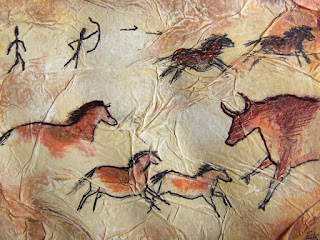 They creep up the stairs, finding another sliding metal door at the top. Behind it, they can hear the soft crackling of fire. They search their meager inventories for firefighting tools, then open the door. The room is covered in a carpet of skin and hair, with a dying fire and hammered pot in the center.
After planning to contribute whatever food they could find to the stew, they listened at the other doors, hearing breathing from one, and a mechanical whirring from the other. They choose the whirring door, finding Driver B: a set of wheels in a torn-open casing, screeching as they drag the Engine down the track. There's two other doors and through one they could hear an argument. They check the unoccupied room first, finding a staircase, then pick up their weapons, breathe deeply, and knock on the arguer's door.
They could hear as someone placed something on the ground (a pole, used to stop the door from opening), and then it slid, revealing three Ghouls - fragile, scale-less, and bipedal. Two of them point spears at the PCs while the third, wearing a crown of foil and wearing an engraved sword on her hip, barks orders they don't understand.
In the room behind them is a computer console, covered in talismans and maps drawn on skin.
When a guard sets down their spear and moves to arrest the PCs, grappling the Meddler, the Instrument dodges past them both, grabs the spear, and hands it to I. A fight breaks out, where both the Instrument and I attack the leader, stabbing her in the sword arm with the spear and punching her in the face.
The Meddler pulls out his wrench and cracks his captor over the head with it, while You first attempts to grapple the other guard, fails, and overclocks his metabolism to act again, shifting his grapple into a quick stab to the temple.
The leader nicks one of the Instrument's arteries with her sword, causing them to bleed, while the still-armed ghoul cuts You's cheek with his spear. The unarmed guard continues to grapple with the Meddler, hoping to pin them.
Round 2 begins: the Instrument goes to grapple the leader, but she manages to stab them in the arm before being immobilized. Then, I stabs the unmoving ghoul in the eye, fatally.
The Meddler continues to grapple with one of the guards, until they break free and crush his skull with their wrench. You lunges forwards with their knife, clipping the last ghoul in the arm and getting a stab to the leg in return.
In the last round of the combat, I leaps from his vantage point to avoid the final ghoul's stab, as the Meddler hits him in the back of the head and the Instrument drives their spear fatally through his ribs.
As the adrenaline fades, the Meddler, the Instrument, and I come to a realization: they just killed someone. I lies unmoving in the corner as the Instrument gazes, catatonic, into the leader's empty eye socket.
The Meddler walks slowly to the console, and listens to their headset as it instructs them on how to bring the monorail to a safe stop. Then, they bandage their wounds, and think.
The Instrument breaks the silence. "I thought... I thought He would reward us, and provide further Instruction. Upon completion."
I shakes their head. "I don't think the instructions were meant as a reward. I think instructions are provided only as long as service is needed."
The whine of the wheels slowly falls silent.
at June 12, 2021