A: Good afternoon! Would you like to introduce yourself and your project?
K: Sure! I'm kahva. I've been playing OSR games since about 2018, particularly GLOG and Into the Odd - or something in between the two. My project is Boots Full of Mud, an overland travel procedure accompanied by two topographic maps. 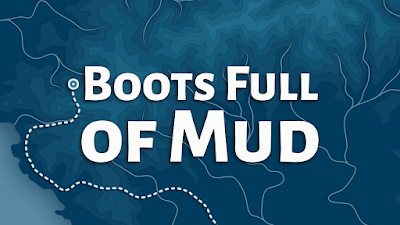 A: What are the basics of that travel procedure, and what do you think it gives a game that a standard crawl doesn't?
K: The foundation of the procedure is the watch - a unit of time roughly equal to four hours. Each watch has three phases: weather, planning, and resolution. The party can accomplish one activity per watch - think things like trekking, resting, or delving into a dungeon. My focus has been on creating rules that are simple, easy to remember, and easy to reference when that's necessary; while still taking advantage of all the information afforded by topographic maps.
Compared to other travel procedures the most obvious difference is the ability to take advantage of all that information. I've always been fascinated by maps, to the point of approaching them like art pieces - displaying them on my walls like you would a painting. Hexcrawls and pointcrawls have never scratched the same itch that examining a detailed map of a region and plotting your course does.
A: Speaking of those maps - if you aren't using hexes or points, how does your system track distance?
K: All the maps include a scale - 1 centimeter is equal to 5 kilometers, for example. When using physical maps I like to get a piece of string and mark it in appropriate increments. If playing online, the best solution is to use a VTT that has a measuring tool (roll20 does, as do many others).
I don't sweat the details much, though. Especially when playing online winding paths can be a difficult to measure accurately, so I'll usually just get a quick estimate and call it good.
A: Your KS has a tier with example maps, but is there anything in the zine itself to help people make their own?
K: No. There are some tools to aid in creating dynamic weather and encounter generation, but nothing for map creation.
It is worth mentioning, though, that the rules can be used with basically any map you pick up - be it a real world US Geological Survey map of your area, an atlas-style map of a region, or even a quick sketch you threw together 10 minutes before the game.
You can even use this procedure with a standard hex- or pointcrawl with just a few tweaks.
A: That seems like it may be more helpful anyway.
About these maps - they're more of an endeavor than a lot of ZQ projects (where you're just mailing the zine and you're done). What made you decide you needed to release physical maps?
K: The maps are really the core of the project for me - I created the rules to support the maps, not the other way around. I love the experience of rolling out a big map of an unfamiliar place and making sense of it, plotting your course, making decisions. I wanted to bring that to my RPGs, so the maps came first. Then I needed to create rules to support them. The big challenge there was making the rules smooth enough they wouldn't bog down play, while still making use of all the detail a topographic map provides.
A: In that case, let's keep talking about the maps.
Unless you reach your stretch goal, you're making 2 to release with the Kickstarter - what are they?
K: The first is a sparsely-populated subarctic island. I imagine it could exist somewhere between the Faroe Islands and Iceland in our world.  It's got a spine of tall mountains, lots of rivers, and a few mostly disconnected settlements. It's pretty close to final - I'll rename things, tweak some topography here and there, maybe adjust some colors - but nothing too major.
The second is a humid equatorial island. I imagine it could exist somewhere in the Indian Ocean or off the coast of Central America. It's got broad river valleys carved into the mountains, dense cloud forests, and a smattering of settlements. This one is still being drafted - the topography is there but will be changed up a bit, as will the rivers, and the color scheme might be revamped.
A: These both also come with brochures, but your Kickstarter pitch says the maps are unkeyed. In that case, what's actually inside the brochures?
K: The contents of the brochures fall into 3 categories:
1. Weather and encounter generation tools tuned to the environment and ecosystem of the map.
2. Descriptions of a selection of landscapes found on the map.
3. Descriptions of the towns and villages found on the map. These are meant as a jumping-off point for referees, they're not fully detailed adventure locations. Slotting in locations from your favorite modules would be a great way to flesh them out a bit more.
A: And those brochures are being partially written by Jojiro - did you always intend to work with him, or was this a recent change?
K: The weather and encounter tools will be done by me, but yeah, all the descriptions will be written by Jojiro. It is a pretty recent development, and one I'm happy about. I enjoy writing mechanics and procedures, but the closer something gets to prose, the more difficulty I have. I'm happy to focus on the maps and mechanics and let Jojiro handle the text in the brochures.
A: I think it'll be great.
Before we wrap up, is there anything else you'd like to talk about?
K: Nothing comes to mind! If anyone wants to chat with me about the project - or anything else - they can find me on the OSR discord.
A: Alright! Thanks for your time.
at February 14, 2021