Archon: Would you like to introduce yourself and your project?
Ava: Yeah, sure. I'm Ava, I am barely a person, but I have spent the past 5 years noodling on a little game called Errant and it has now been unleashed upon the world. It's a pretty classic fantasy RPG, but where it differentiates itself I think is in the wide range of procedures it gives you for dealing with game situations like chases, duels, lockpicking, domain management and downtime in ways that are fast, simple, meaningful, and fun. 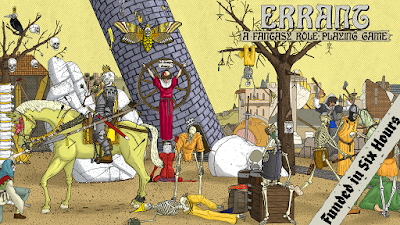 Archon: Do you have an example of one of these procedures that you think exemplifies the system?
Ava: I think lockpicking is a fairly good one. Instead of just rolling a skill check, players open locks by selecting one of three options (Tap, Turn, Twist). A lock requires 3 correct actions to pick; no two actions are ever used in a row. If you pick a wrong action, the lock gets Stiff, and your next wrong action will make it Jam, rendering it unopenable.
Archon: How modular are these procedures? Like for lockpicking, does Errant have advice or options on how to make more complex locks?
Ava: Yeah, it does give ways to make more complex locks. I think most of the procedures are pretty modular; the book explicitly call out adjusting or removing things based on the needs of your game. The Downtime Turn procedures though give the game a lot of its specific flavour, in my opinion, so I reckon those are worth giving a shot out of the box as is. Some things that I describe as procedures, like tracking different types of turns and rolling an Event Dice each turn to see what happens (e.g. if there's a random encounter, if you need to rest, if you use up some supplies) are pretty core to the game and changing them would have knock-on effects throughout the whole system. I go into this pretty in-depth in my last blog post, the second in my series of deep dives into the design of Errant.
Archon: It's interesting to see someone discussing the reasons and goals they have when designing a game, like you do in those blog posts. Do you think that made it easier to work on Errant?
Ava: The blog posts are largely retrospective, I don't think they've shaped the design of Errant much at all. Just describing my thought processes and specific decisions I made.
Archon: Ah, alright.
Some old RPGs that could be described as "procedure-heavy" are now often seen as overly-complex and disconnected from themselves - like a dozen minigames with no connective tissue. Does Errant do anything to address this, or was it not a worry during development?
Ava: I've tried to take some measures to unify things. There is a core mechanic in Errant which is a d20 roll equal to or under a given attribute and above a Difficulty Value. Then there are the 4 turn types: Travel Turns, Exploration Turns, Initiative Turns, and Downtime Turns. On all of these Turns except Initiative Turns you roll 1 or more Event Dice to determine what happens. So most of the procedures in Errant refer back to one or both of these foundational aspects of the game: something either takes a turn to do and/or requires a check of some kind.
Archon: That really does seem like it solves the problem to me.
Looking at your pitch, you seem to have a very large team (12 in all) for a Zine Quest project. How did you manage to get together so many people for what I think is your first Kickstarter?
Ava: I am lucky to be part of a fairly tight knit community of creators and friends who have graciously offered to help me along with the project for next to no compensation. As Nick, my layout designer put it, "small art only survives because small artists help one another."
Archon: That's wonderful. I'm happy you're getting the help your project needs to be how you want it.
And speaking of help, Exalted Funeral is running distribution for Errant. Do you have any advice for people who want to work with a publisher or distributor?
Ava: Truth be told getting to work with Exalted Funeral is entirely the results of the efforts of my publishing partner, Chris Mennell. But from what I've seen: just email people, it never hurts to try.
Archon: There's still more than a week left in your campaign, and it does look very well-run, but do you think you've learned anything important from it yet?
Ava: One thing that seems completely obvious in retrospect but I didn't realise was possible was to partner with multiple distributors to better serve international customers. Going forward that's definitely going to be my M.O.; it hurts seeing how high non-U.S. shipping prices are.
Archon: Errant has already gone far past your goal - will this motivate you to aim higher with your next project?
Ava: I have very lofty ambitions for Errant volumes 3 and 4, which will likely have to be brought down to reality at some point, but yes. I'm aiming to take whatever money from this that doesn't go into the hands of artists, editors, designers, and consultants on this project and put it towards making future Errant products as crassly and absurdly gorgeous as they can be.
Archon: That's all the questions I have - is there anything else you'd like to talk about?
Ava: There may or may not be a bonus Errant adventure involving a Goose dragon in the works...
If you want to hear more, come down and chat in our community discord!
Archon: Thanks for your time, have a good evening.
at February 16, 2021