On the GLOG discord and its close siblings, an idea for an archaeological campaign has been simmering - a megadungeon (which, for the purposes of this post, will be called the Inverted Pyramid) has been discovered, and the PCs enter to write its history, translate its Dead Language, and learn about its Builders - not to just loot the place (after all, any common thieves could manage that) but to research it. 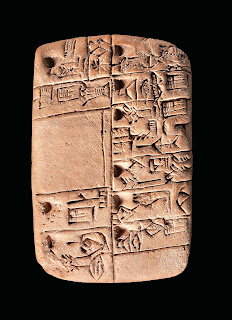 One of the ideas of this hypothetical campaign is a stronger divide between class roles - a Fighter is not someone who's slightly better at fighting, they solve fighting problems. Other characters are at best incompetent and at worst actively harmful in a fight.
But, if one character solves fighting problems, we need other kinds of problems - traps and the like are already well-trodden ground, so the Translator deals with a new issue - the Dead Language used by the civilization that built the Inverted Pyramid.
The Dead Language
The Dead Language comes in two forms - Terrestrial Script (ansi e-tan, literally "words that are close to the ground"), a normal language used for writing and record-keeping, and the Spiritual Script (ansi en-ot, "words that are in the sky"). The Spiritual Script can, with the correct enunciation and enough focus, cause changes in the world around you.
Some people in the OSR space are both knowledgeable and determined/crazy enough to make their own conlang. I am neither. Instead, here is a list of 20 sample words of Terrestrial Script, which the Translator can roll on at character creation. If you want, you can expand this into an actual conlang, substitute one you already like for it, or otherwise mess with Terrestrial Script. If you aren't interested in taking these steps, simply tell the Translator the words they know, and surround them with meaningless syllables.
A note on the Dead Language's numbers: sen is placed between them to add, os is placed between them to subtract (ot-sen-fashed is 5+4, ot-os-feshed is 5-4). However, ot-sen-fashed-dren-fir-ti doesn't mean "15", but means "more than could ever be counted", and usually appears in historical texts to mark the passage of generations, or in religious texts to describe the Builders' god (who, for example, is described has having "innumerable hands/angels".
In contrast to Terrestrial Script being an actual language used by the Builders, Spiritual Script is a magic system - specifically, a modified version of rune magic system from Ten Foot Polemic, along with standard GLOG magic dice.
Guidelines for GLOG Rune Magic
If a rune already exists (placed on one of the walls of the Inverted Pyramid, for example), it requires no MD or magical talent to use. You just push and the effect goes off.
If you're making a rune, you need to invest MD into it. For every MD you use, you can add a Minor Rune. These MD aren't rolled until the rune is activated.
Generally, damaging runes deal [best] damage, or [dice] damage with some kind of status effect (freezing, poison, etc.). Remember, the campaign's structure is based on heavy class specialization - the Translator is supposed to do minimal or no fighting.
Take and Repel runes each have a range of 20*[dice] feet. Make runes will, by default, place the created object either in or directly over the user's hand (Make Earth drops some dirt in your hand, Make Light creates a hovering glow-sphere).
The Translator
A: Old Notes, Close Study, +1 MD
B: Rubbing, +1 MD
C: Good Handwriting, +1 MD
D: Ancient's Tongue, +1 MD
Δ: University Tenure
Old Notes
You start knowing 3 random words of Terrestrial Script. You also begin with one Meticulous Die, representing your focus and concentration. Unlike Magic Dice, this cannot be used to cast spells. Instead, it can be used for Close Study of Terrestrial Script, and empowering rubbings of Spiritual Script. Meticulous Dice decay and are regained in the same way as Magic Dice, but do not have Mishaps or Dooms except during Close Study.
Close Study
If you can't determine the meaning of a piece of Terrestrial Script on your own, you can invest MD (along with one hour of study per MD used) to look through known words, assumed etymology, and other hints, eventually coming up with translations of [dice] words in the writing being studied. If a Mishap is rolled, one word in your translation is wrong - it still kind of works in this line, but it doesn't mean that. (For example, you may mistranslate "the king rode a chariot pulled by oxen" as talking about a farmer, or about a plow). If a Doom is rolled, your concentration is broken. You spend your time pacing, unable to focus, and accomplish nothing.
Rubbing
With the right equipment, you can make a rubbing of a piece of Spiritual Script, and invest MD in it. The rubbing can be activated by anyone, and your MD return immediately when it is used.
You cannot make rubbings of rubbings.
Good Handwriting
You have analyzed the Spiritual Script enough that you can write runes of your own.
Ancient's Tongue
After dozens of sleepless nights poring over assumed descendants of the Dead Language and carefully transcribing the ramblings of the Inverted Pyramid's undead, you have recreated a spoken version of Terrestrial Script.
However, only 10 glyphs of your spoken version are correct (roll randomly once again). The rest, you'll have to correct through speaking to liches, mummies, golems, and other inhabitants.
Δ: University Tenure
Write, then publish, an article demonstrating comprehensive knowledge of written Terrestrial and Spiritual Script.
2d4 excitable archaeology students arrive at the camp, each with one Meticulous Die they can apply to Close Study. They are uninterested in entering the Inverted Pyramid itself, due to its danger. Any further discoveries published will bring another 1d4 students.
at October 17, 2021