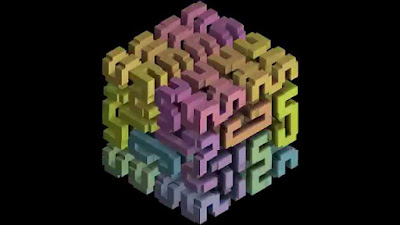 The Xenoterrarium Cube is a rare creation, beloved by the more space-obsessed breed of wizard. They are a living ooze, bred to replicate the environment of a far-off world, ensuring their occupants stay alive and comfortable.

Killing them is discouraged - the aliens within may not live long, but their reactions with terrestrial biology are unpredictable.

They are rarely hostile, as they wish to keep their passengers alive. Though, if the Cube determines the passenger needs fresh food, they will go hunting.

Attacks with tendrils (which may be acidic, alkaline, or otherwise dangerous): two attacks, both at +2 to-hit, dealing 2d4 damage.

1. A long, deep red worm. It can attack by swimming into one of the Cube's tendrils, then reaching out to bite. This bite deals 1d6 damage and requires a Save against hallucinations from its psychoactive venom. When the Cube dies, the worm sublimates on contact with the air, releasing a 20x20 foot cloud of its poison.

2. A grey metallic sphere. It can attack by firing a laser at -2 to-hit (as it is refracted by the Cube), which deals 2d6 damage and sets the target on fire. It can be reflected with mirrors, though the Cube is immune to it. When the Cube dies, the sphere rusts away, leaving only the baseball-sized laser core. This core will set anything within 10 feet of it on fire until it is either smashed or doused with water.

3. A squid with knotted, thin tentacles bunched up in the small space of the Cube. It can stretch them, carefully, to grapple a PC within up to 100 feet of the Cube. When the Cube dies, the tendrils writhe as the alien burns, grabbing and throwing anything within 20 feet.

4. A two-foot-tall blue humanoid, capable of psychic communication and telepathic control of the Cube. It has interests and ambitions just as any person does. If provoked, it will attack with psychic bursts (1d4 damage and Save against temporary blindness as it cuts the signal between your eyes and brain). When the Cube is killed, the passenger attempts to escape by possessing someone within 50 feet, preferably an NPC. If it attempts to possess a PC, they must Save - on a pass, the alien's consciousness is repelled, and it dies. On a failed Save, the alien enters their head - not as a controller, but as a passenger. Both the PC and the alien can now talk to each other through thought.

5. A pair of hundred-legged lizards, separated by a ooze wall. They can both attack by spraying superheated blood from their eyes, leaving cloudy streaks through the Cube. This is two ranged attacks, each at +1 to-hit and dealing 1d6 damage. When the Cube dies, the wall collapses and both lizards fight to the death even as their scales crack from the Earth's air.

6. A spider-like creature with curled legs, constantly hopping up and down. As an attack, it will jump out of the Cube, trailing ooze behind it, and crash into a PC, dealing 1d8 damage and forcing a Save against falling prone, then bounce back into the cube. When the Cube dies, the alien begins to bounce randomly off the walls, accelerating with every impact as it speeds through the dungeon and dealing 1d8 damage plus one for every dungeon turn since it was freed when it hits something. Eventually, hopefully, it will find its way out of the dungeon and bounce back into space.

1. A tiny point of red light sits at the top of the cube - a miniature Sun to warm the passenger.

2. A gnarled tree with silver leaves grows through the cube.

3. Grass grows down from the top of the cube into the terrarium.

5. Multicolored gravel covers the floor of the Cube.